A new imaging facility brings the nanometer and atomic worlds into focus.

In a basement below a basement, inside a room with its own electromagnetic field, 6-inch-thick steel walls and a concrete floor that runs 3 feet deep, electrons are blasting nerve cells from a mouse.

Cross-sectional slices measuring 10 billionths of a meter slowly populate a monitor beside the microscope.

“Pretty much what you do is you sit down and you build Google Maps,” says Anastas Popratiloff, the director of the GW Nanofabrication and Imaging Center, as he putters with the incoming data.

And it’s an apt analogy. The new imaging lab deals in richly detailed molecular landscapes, at times on the level of individual atoms. A flick of the controls might zoom you inside, say, a tuft of neurons, for a 360-degree gander. There are microscopes that build 3-D maps of the concentrations of various atoms in a sample, and those that analyze individual pixels across every wavelength of light, giving materials—from paint pigments to body tissues—an identifiable signature. 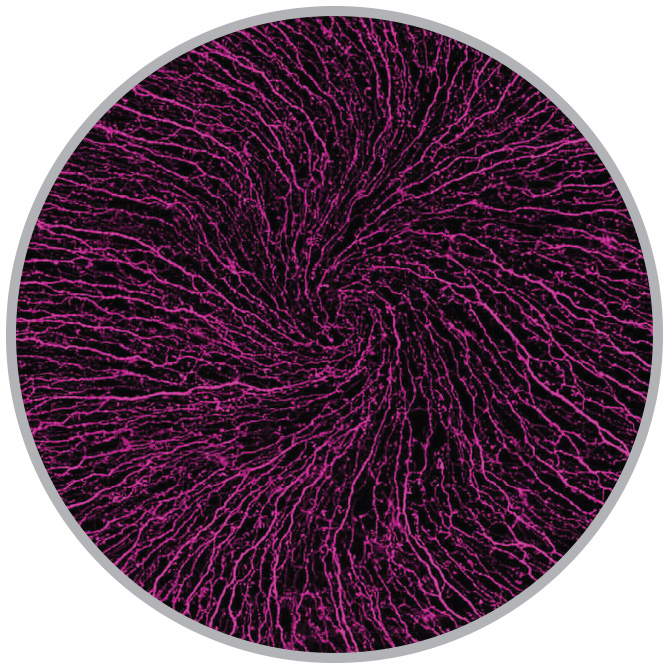 Long, conductive arms—or axons—of nerve cells branch and swirl across a mouse cornea. Mary Ann Stepp, a professor of anatomy and regenerative biology and of ophthalmology, is studying the development of these nerves, which play a role in blinking. (Image courtesy Mary Ann Stepp)

They’re the kinds of machines that bore into the infinitesimal and turn out gigabytes by the dozen. The microscope that’s pummeling mouse nerve cells with electrons on Friday afternoon will likely produce, by Monday morning, some 35 gigabytes of data. (The 2015 Encyclopaedia Britannica, images and all, can be had for 5 gigabytes.)

At the time, in March, the facility in Science and Engineering Hall had been online about only a month and, for the moment, it’s quiet. White noise presses down on the space. Still, the microscopes are cranking out images as quickly as researchers can be trained on them. As one group of seven leaves an afternoon training, Dr. Popratiloff says another seven will be following soon behind.

The center occupies a brightly lit and white-walled 4,000-square-foot space beside a nanofabrication suite with an even larger footprint. Both were built into bedrock to dampen vibrations from subway trains, which roll through the station a block away. In some rooms, specially constructed shielding protects experiments from the electromagnetic fields produced by the passing trains.

“The space is unique,” Dr. Popratiloff says. “There’s nothing like it, probably, at another private institution on the East Coast.”

The center’s five new microscopes—obtained through partnerships with manufacturers including FEI, Leica and Raith—offer researchers a leap in resolution, sensitivity and speed. They augment an older fleet of three high-powered microscopes in the School of Medicine and Health Sciences.

The bump in microscopes also means simply more machine hours. And several of the microscopes can be programmed to run autonomously day and night. (“If you buy a $2.5 million thing, it has to work nonstop,” Dr. Popratiloff says.) He’s hoping the lab’s capacity and location—close to federal and international agencies and other institutions—also will draw outside users.

The new suite is “going to make a huge difference in productivity—night-and-day difference,” says Michael Wagner, a GW materials scientist and chemistry professor, who runs one of the dozens of GW labs that have cued up for training on the electron microscopes alone. Until recently, he had to travel to the University of Maryland to do this kind of work. 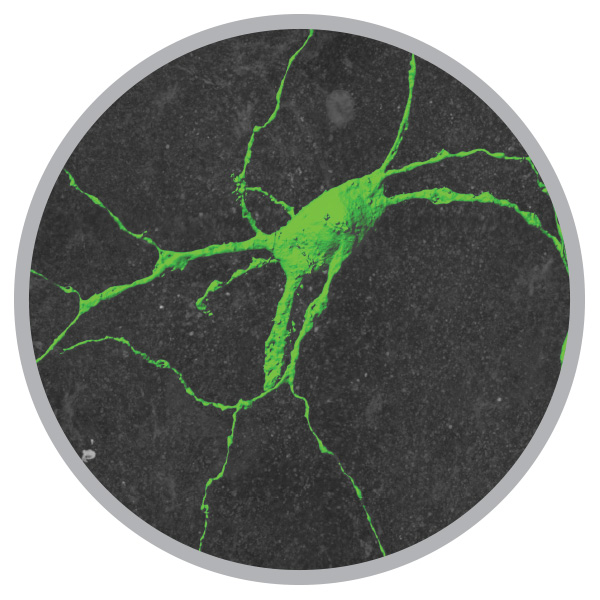 A neuron involved in swallowing, imaged as part of a grant to study pediatric dysphagia, or chronic difficulty eating and swallowing, led by professor Anthony-Samuel LaMantia and a team from School of Medicine and Health Sciences (Image courtesy Anastas Popratiloff) 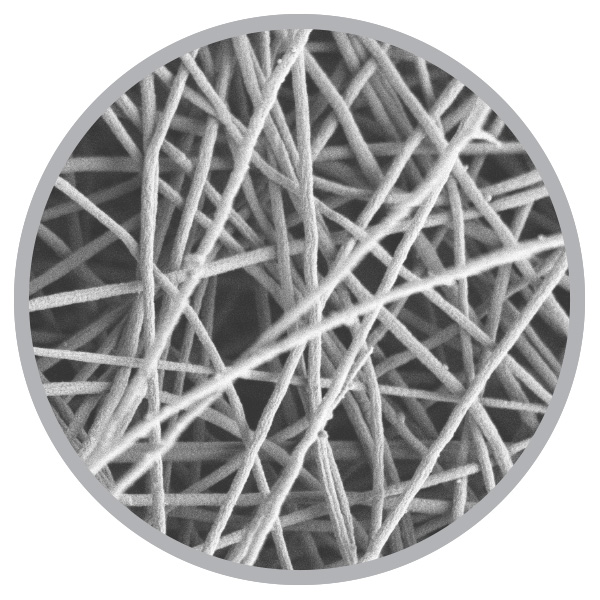 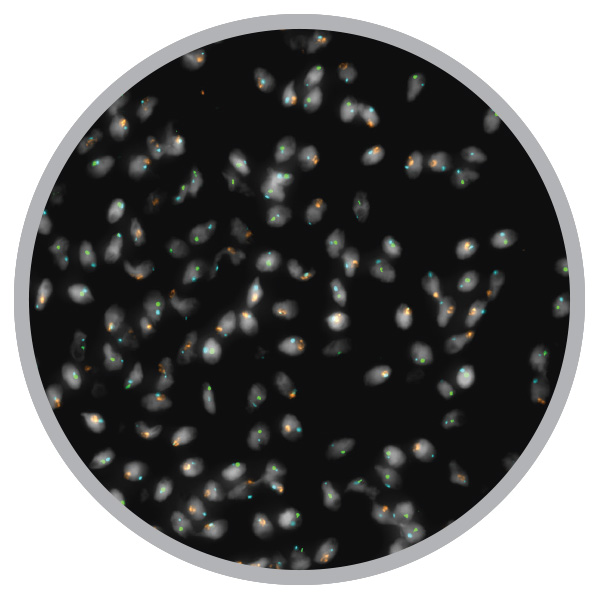 “It’s hard to be a carpenter if you don’t have a hammer,” he says.

Closing the door on a room where the vending-machine-sized white cube of a transmission electron microscope sits off to the side, Dr. Popratiloff walks down the hall, opens another door and flicks on the light.

“Now,” he says, “the important thing is discovery, right?” He awakens one of two 50-odd-inch Sony HD monitors in the image analysis room and pulls up a portrait of a nerve cell.

Blown up on the screen, deep microscopy seems to close the gap between the natural world’s smallest and its grandest layers; it is one frontier. The storm-cloud-gray surface of the nerve cell is a lunar-like expanse, scarred and pocked with craters. In another image, vibrantly hued HIV cells, with flecks of cholesterol on their surfaces, aren’t so unlike ethereal nebulae wafting by the Hubble’s lens. Seeing so intensely at such a tiny scale requires a new way of asking questions, a “new dimension” in thought, Dr. Popratiloff says.

“You could spend easily 15 years in your career and you don’t know what’s going on,” he says. “And then one single image shows you what the outcome is. It’s amazing.”

For more on the GW Nanofabrication and Imaging Center, visit nic.gwu.edu 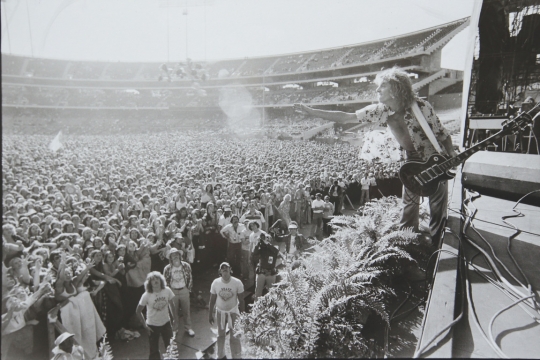 The Fight and Fury of the Z-Man

Iconic photographer and eternal San Franciscan Michael Zagaris, BA '67, has shot rock gods and all-stars, stood up to The Man and almost died twice. He’s spent his life
doing everything you always wanted to do, and now that he’s getting older ... absolutely nothing’s changed. 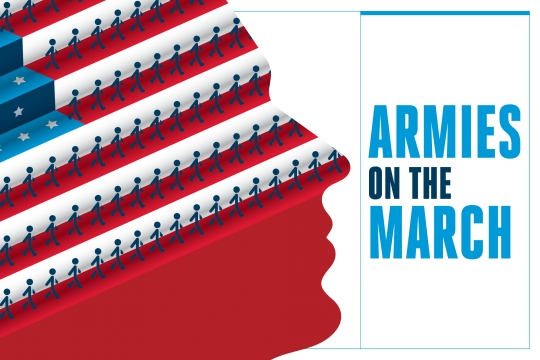 Armies on the March 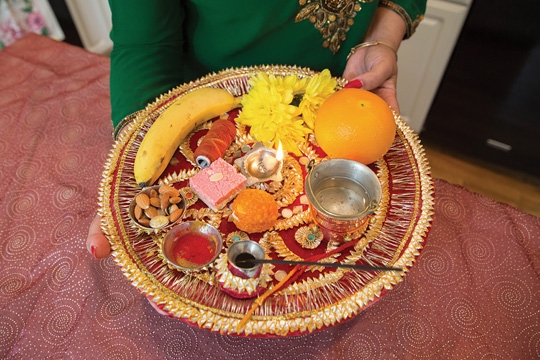 When the flame of an old tradition gets snuffed out, should it be rekindled—or reengineered?