Submit your own class note here or reach us by mail at:

Claudia Chapline, BA '53, published her second memoir, Moving Out Of The Frame (Norfolk Press, 2015). In the book, she shares 50 years of her creative life in modern dance, performance art and community arts in California.

Rhoda B. Miller, BA '62, MA '68, translated from French Contemporary China: Between Mao and Market by François Godement (Rowman & Littlefield Publishers, August 2015). The book is an overview of Chinese politics, economy and society.

Larry Broadwell, BA '66, published The Hikers Guide to Civil War Trails in the Mid-Atlantic Region. The book includes maps, photos and descriptions for 27 trails through an area known as the "cockpit of the Civil War," including Gettysburg and Antietam.

James Korman, JD '68, of Bean, Kinney & Korman in Arlington, Va., was selected by his peers for inclusion in Best Lawyers 2016 for family law. He also was recognized as a 2015 "Leader in the Law" by Virginia Lawyers Weekly.

Anthony M. Zola, BA '70, is an adviser to the government of Laos' Ministry of Agriculture and Forestry, formulating an agro-economic upland development program for about 80 percent of the country's area.

Alan S. Nadel, BS '71, JD '76, was selected by his peers for inclusion in Best Lawyers 2016. He was recognized for his work in patent litigation, intellectual property litigation, patent law, trademark law and copyright law.

Bruce W. Merwin, BA '73, an attorney at Thompson & Knight's Houston office, was selected by his peers for inclusion in Best Lawyers 2016. He also was named a 2015 "Texas Super Lawyer" by Thomson Reuters and one of the "Leaders in their Field" for construction law and real estate law by Chambers USA.

Larry Movshin, JD '74, a partner in the law firm Wilkinson Barker Knauer, was inducted into the Wireless History Foundation Hall of Fame on Sept. 8 at the Four Seasons Hotel in Las Vegas.

Howard Williams, LLM '75, a partner at Brooks Pierce in Greensboro, N.C., was selected by his peers for inclusion in Best Lawyers 2016.

T.J. Clemente, BA '76, published Triangle Love (CreateSpace, August 2015), a novel about three freshmen who meet at GW in the early 1970s and form a two-decadelong bond, leading to love, wealth and tragedy.

James Schroll, JD '78, of Bean, Kinney & Korman in Arlington, Va., was selected by his peers for inclusion in Best Lawyers 2016 for his work in bankruptcy, creditor/debtor rights, insolvency and reorganization law.

Lee H. Dymond, MPhil '76, PhD '79, wrote A Recent History of Recognized Economic Thought: Contributions of the Nobel Laureates to Economic Science (Lulu Publishing Services, May 2015). The book offers insight on the accomplishments and impacts of winners of the Nobel prize in economic sciences.

Michael S. Mitchell, LLM '79, of Fisher & Phillips in New Orleans, was selected by his peers for inclusion in Best Lawyers 2016.

Leo Fisher, JD '80, of Bean, Kinney & Korman in Arlington, Va., was selected by his peers for inclusion in Best Lawyers 2016 for commercial litigation.

Gregg Berman, BA '84, JD '87, of Thompson & Knight in New York, was selected by his peers for inclusion in Best Lawyers 2016 for corporate law.

David A. Samuels, MBA '84, was appointed to the Board of Directors of Junior Achievement of Greater Washington and elected vice chair of development for the Charles E. Smith Life Communities.

Ronald A. Hodge, MBA '87, coauthored Know How: Experience, Expertise, Execution (CreateSpace, June 2015), a collection of the best advice from more than 30 leaders that are part of the Shields Meneley Partners family.

Phillip Crawford Jr., JD '88, wrote The Mafia and the Gays (CreateSpace, March 2015), which examines the mob's historical involvement with gay bars in cities across the United States.

Melissa E. Darigan, BA '89, became president of the Rhode Island Bar Association in June 2015. She is a partner in Partridge Snow & Hahn and co-chair of the firm's litigation practice group.

David Robinson, JD '90, was named honorary consul for Japan in North Carolina by the Japanese Ministry of Foreign Affairs and the U.S. State Department.

Michele Wehrwein Albion, MA '91, edited The Quotable Amelia Earhart (University of New Mexico Press, September 2015), a collection of the pilot's quotes about, notably, her flights, as well as her opinions on politics, work, religion and gender equality.

Mitch Pascal, BA '91, was named principal of Tuckahoe Elementary School in Arlington, Va. He also is an adjunct professor in the GW Graduate School of Education and Human Development, where he teaches a social studies methods class.

Marc Druckman, JD '92, joined the Miami office of the international law firm Greenberg Traurig as a shareholder in the corporate and securities practice group.

Ron Fricker, MS '92, is a professor and head of the Department of Statistics in the College of Science at Virginia Tech. Previously, he served as a professor in the Operations Research Department at the Naval Postgraduate School.

Mehmood Kazmi, BA '94, a partner with Share Investment Company in Greenbelt, Md., was appointed to Virginia Tech's Board of Visitors in the State Council of Higher Education.

William W. "Bill" Riley Jr., BA '98, a shareholder in GrayRobinson's Miami office, was appointed by the Miami-Dade Board of County Commissioners to the Court Capital Infrastructure Task Force.

Lonnie Giamela, BA '99, a partner in both the Los Angeles and Irvine, Calif., offices of law firm Fisher & Phillips, was named to the 2015 list of "Southern California Rising Stars" by Super Lawyers.

Scott M. Grossman, JD '99, a shareholder in the business reorganization and financial restructuring practice of international law firm Greenberg Traurig, was sworn in as president of the Bankruptcy Bar Association of the Southern District of Florida for the 2015-16 term.

Matt Katz, BA '00, and a team from WNYC radio won a Peabody Award for their coverage of New Jersey governor Chris Christie and the bridge scandal.

Heather McKee Hurwitz, BA '01, received a PhD in sociology from the University of California-Santa Barbara on June 14. Dr. Hurwitz's dissertation was titled, "The 51%: Gender, Feminism, and Culture in the Occupy Wall Street Movement."

Ryan Sutton, BA '01, won a James Beard award—the Craig Claiborne Distinguished Restaurant Review Award—for his work on Eater.com: "Artisanal-Everything Roberta's Defies the Stereotypes," "Once an Icon, Per Se is Showing its Age" and "Six Reasons Why Cosme is One of NYC's Most Relevant New Restaurants."

Brandon Moss, BS '00, JD '03, was promoted to partner at Murphy, Hesse, Toomey & Lehane in Quincy, Mass. He also was appointed chair of the Massachusetts Bar Association Public Law Section Council and to the executive board of the Rotary Club of Quincy. Mr. Moss practices public law, land-use law, aviation law and litigation.

Regina Bowman-Goldring, MA '02, was promoted to assistant vice president of student services at the College of Southern Maryland, Leonardtown Campus.

Justin Petrone, BA '02, published My Estonia 3: What Happened? (Petrone Print, June 2015), a travel memoir that follows his previous novels My Estonia 1 and My Estonia 2.

Joseph Black, MS '03, was named Northrop Grumman Senior Faculty Fellow by the Virginia Tech Board of Visitors. He is associate professor of aerospace and ocean engineering in the College of Engineering at Virginia Tech. He's also associate director of research for aerospace systems at the Ted and Karyn Hume Center for National Security and Technology.

Lincoln Michel, BA '05, wrote Upright Beasts (Coffee House Press, 2015), a short-story collection about individuals doing battle with their darker, weirder impulses as the world collapses around them. Among the stories: children go to school long after all the teachers have disappeared; a man manages an apartment complex of attempted suicides; a couple navigates their relationship in the midst of a zombie attack.

Helen Nowlin, LLM '05, developed EducationalFamilyEstateApps.com, a website that offers unique coverage of the American Indian Probate Reform Act and makes the connection between guardianships and the Indian Child Welfare Act. Guest writers and bloggers are welcome, upon approval of a proposed topic.

Bhaveen Jani, BBA '06, joined Blank Rome as an associate in the law firm's consumer finance litigation group based in its Princeton, N.J., office.

Jessica Denson, BA '07, appeared in Show Me a Hero, a six-episode HBO miniseries from The Wire creator David Simon that ran during the summer of 2015. Ms. Denson played Gail Wasicsko, the sister in- law of embattled Yonkers, N.Y., mayor Nick Wasicsko, played by Oscar Isaac.

Erik K. Eisenmann, JD '07, was elected shareholder of Whyte Hirschboeck Dudek. He is a member of the human resources law practice group in the firm's Milwaukee office, where he represents employers in labor and employment law.

Brad Lackey, BBA '07, opened The Presidio Group in Washington, D.C., where he provides holistic wealth management to ultra-affluent individuals and families across the country. He was named a Five Star Wealth Manager for 2015 by The Washington Post.

Jordan McNerney, BA '07, and Alexandra Valenti, BA '07, married on May 30 at Gansett Green Manor in Amagansett, N.Y. Several GW alumni were in attendance, including members of the bridal party who closed the reception with a rendition of the GW fight song.

Aaron Davis, LLM '09, of Thornton Davis Fein in Miami, was appointed to the Board of Directors of the Florida Defense Lawyers Association, a group of more than a thousand leading civil defense lawyers in the state.

Nan Devlin, MTA '09, was named executive director of Visit Tillamook Coast, a new, county-wide destination marketing organization in Oregon. She will lead efforts to develop the Pacific Coast county as a place for nature-based tourism, including paddle sports, fishing, hiking, surfing and camping. Ms. Devlin recently contributed a chapter, "Sustainability in Food and Drink Tourism," for Have Fork Will Travel, an industry guide developed by the World Food Travel Association.

Gary Kraiss Jr., BA '09, was appointed Ward 2 chairman for the D.C. Republican Party. He serves as a program support officer at the U.S. Department of State's Office of the U.S. Global AIDS Coordinator and Health Diplomacy.

Laura Venos, MA '09, wrote and published The Royal Series (CreateSpace, August 2015), a series of children's picture books about smart princesses who want more out of life than tea parties and balls, so they work hard and find themselves in fulfilling careers.

Corey Coleman, BA '10, was selected by Success Academy Charter Schools as a winner of the Teacher Excellence Award for 2015.

Kacy Sellers Lawrence, MPP '10, joined the Virginia Tech graduate school as a data reporting and assessment administrator. She will collect, organize and analyze data and reports to support and strengthen decision-making and planning for the graduate school and the university.

Jared B. Brenner, BA '11, has joined Wilmer Cutler Pickering Hale & Dorr as an associate in the firm's New York office. Mr. Brenner will work in the corporate practice group on transactions for startups and technology companies.

Roberta Richardson, CERT '11, presented at the 64th Annual International Hearing Society Convention and Expo, held in Orlando, Fla., from Sept. 10-12. She may be contacted for speaking engagements on health care quality and other topics at [email protected].

Jake Miner, BA '12, joined the U.S. Department of State as a foreign service officer. Mr. Miner will start his first tour of duty as a political officer in May 2016 in New Delhi.

Cody Pennetti, CERT '12, was named an associate in Dewberry's Fairfax, Va., office. He specializes in site infrastructure design and has more than nine years of experience as a project civil engineer.

Jacob E. Thayer, BA '13, graduated with a Master of Public Affairs from the Lyndon B. Johnson School of Public Affairs at the University of Texas-Austin. Mr. Thayer was also recognized by the U.S. Coast Guard out of a pool of 31,000 as the 2014 Auxiliarist of the Year.

Alexis Melchione, BS '14, joined Structura Inc. as a staff engineer in Rockville, Md. She will provide support on a variety of design projects, including the Landmark Mall Redevelopment and the Brightview Rockville Town Center. 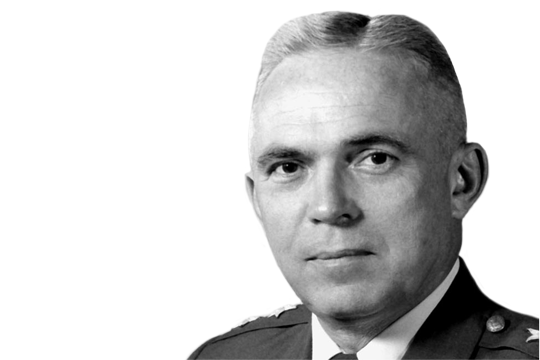 A long-serving superintendent and a reformer of Washington, D.C., public schools, Floretta McKenzie, EdD '85, died March 23 from complications related to Parkinson's disease. She was 79. Dr. McKenzie was superintendent from 1981 to 1988 and oversaw a period of stability for the troubled D.C. school system. Photo: Courtesy The History Makers 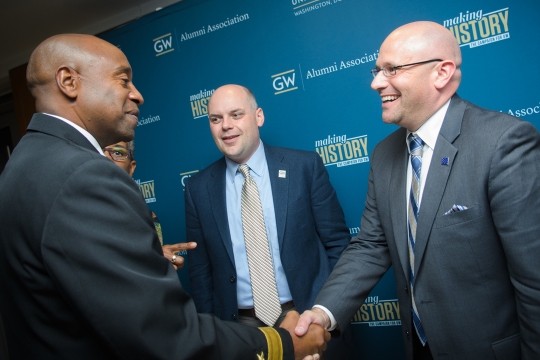 A Curated Tour of Alumni Weekend 2015

The university's more than 1,300 endowments provide funding for scholarships, professorships and programs, among other things, in perpetuity. 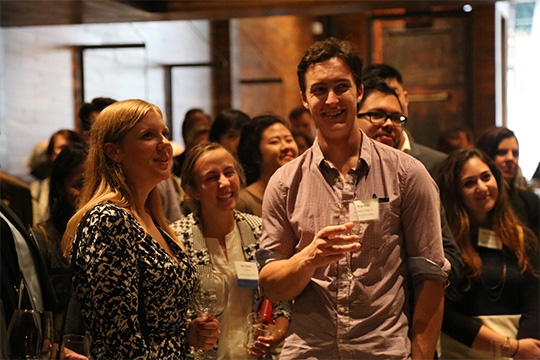 Chardonnay By the Bay

More than 100 GW alumni, parents, prospective students and other guests mingled during a November afternoon of food and wine pairings in San Francisco.