Half a decade after a catastrophic earthquake, a Pulitzer Prize winner finds that life in the beleaguered nation goes on, as it always has.

At just past 10 on a morning in early January, it’s already about 90 degrees in a dusty schoolyard a few miles out of Thomonde, on Haiti’s Central Plateau, one of the poorest regions in the poorest nation in the Western Hemisphere. The glaring white Caribbean sun beats down on a faded sea-green, concrete schoolhouse, which is empty because there are no classes today. Haitians this week are marking the fifth anniversary of the devastating earthquake that killed more than 220,000 people, injured another 300,000 and left more than a million homeless.

Nine George Washington University nursing students and two faculty members climb out of the four-wheel-drive vehicles that have jounced them over nine miles of road that felt like 50. They’re lugging bags of medical basics—from gauze pads and Band-Aids to a bathroom scale for patient weigh-ins and blood pressure cuffs—ubiquitous stethoscopes draped around their necks, their own water bottles in hand.

'It's Indicative of the General Situation Down There' 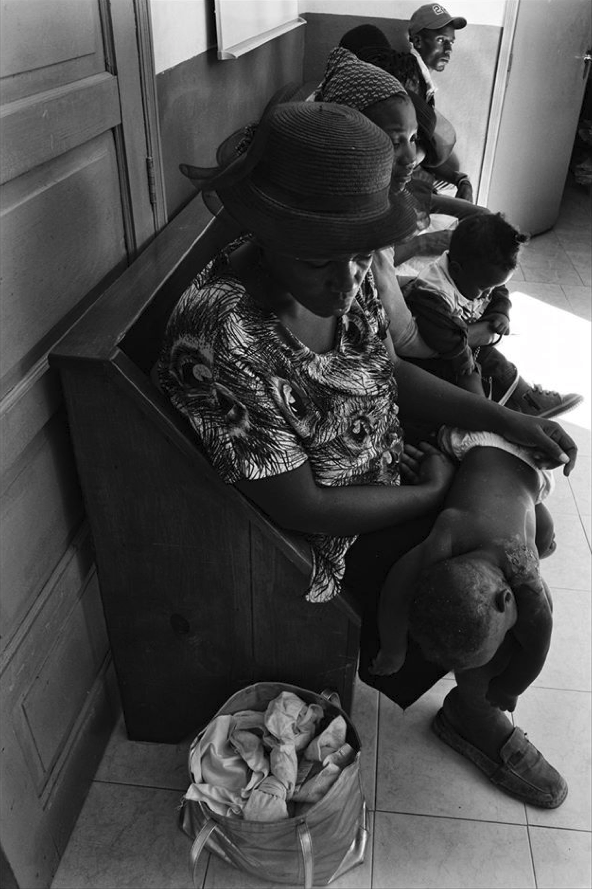 Use the interactive audio player under each image to listen to author and photographer B. D. Colen recount the story behind each photograph.

It’s day two of a weeklong medical support trip, and the group is fresh off of yesterday’s taste-of-Haitian-reality grand tour: a ride over rocky ruts called a road to a field outside Thomonde for a brief clinic session under a tree; a tour of the clinic run by their host, the nonprofit Project Medishare, in a little town called LeHoye not far from the border with the Dominican Republic; and a pass through the tropical Times Square on New Year’s Eve that is market day in LeHoye.

It takes about 30 minutes for the group to transform the dark and empty schoolhouse into the closest thing to a medical facility most of the residents here are ever likely to see. One steel-roofed concrete room becomes a triage, one is a pediatric clinic and another is a facility for adults.

Even before the setup work is done, a long line of patients forms, ranging in age from a few months old to elderly, standing politely waiting to be examined.

Tell people in the United States that you’ve recently been to Haiti and while they may have a sense of the nation’s problems, often they don’t understand the tangle of geography, natural disasters and the long, haunting shadow of history that makes Haiti so different from the more prosperous Dominican Republic, the nation with which it shares the island of Hispaniola.

Haiti sits on the western end of the island, where some of the mountains are 2,000 feet higher than the tallest peak in the Appalachians, blocking the winds and thus the rains that make the Dominican Republic far more fertile. Extensive deforestation for fuel and agriculture, dating back to the nation’s days as the world’s leading sugar producer and France’s richest colony, has eroded the soil and thinned the ecosystem.

After a dozen years of fighting, Haiti’s enslaved population threw out the French in 1803, establishing an independent nation on Jan. 1, 1804. World powers recoiled at the specter of the world’s only successful slave revolt. Neither Britain, France, nor the young United States, not even the Vatican, would recognize the independent republic, severely limiting Haiti’s access to world trade.

Refusing to return as workers to the plantations on which they had been laboring, former slaves fled to remote areas of the countryside, establishing small farms and family-based communities. They lived as disconnected as they could from the central government, and two societies developed: a rural, agrarian one, consisting of the great mass of the population, and an urban upper and middle class that controlled almost every aspect of life in the nation. World powers did come to recognize Haiti’s sovereignty: France as early as 1825 (sources vary), after sailing warships into Port-au-Prince and demanding a large sum to be paid over a half-century; Britain a little more than a decade later; and the United States not until 1862. 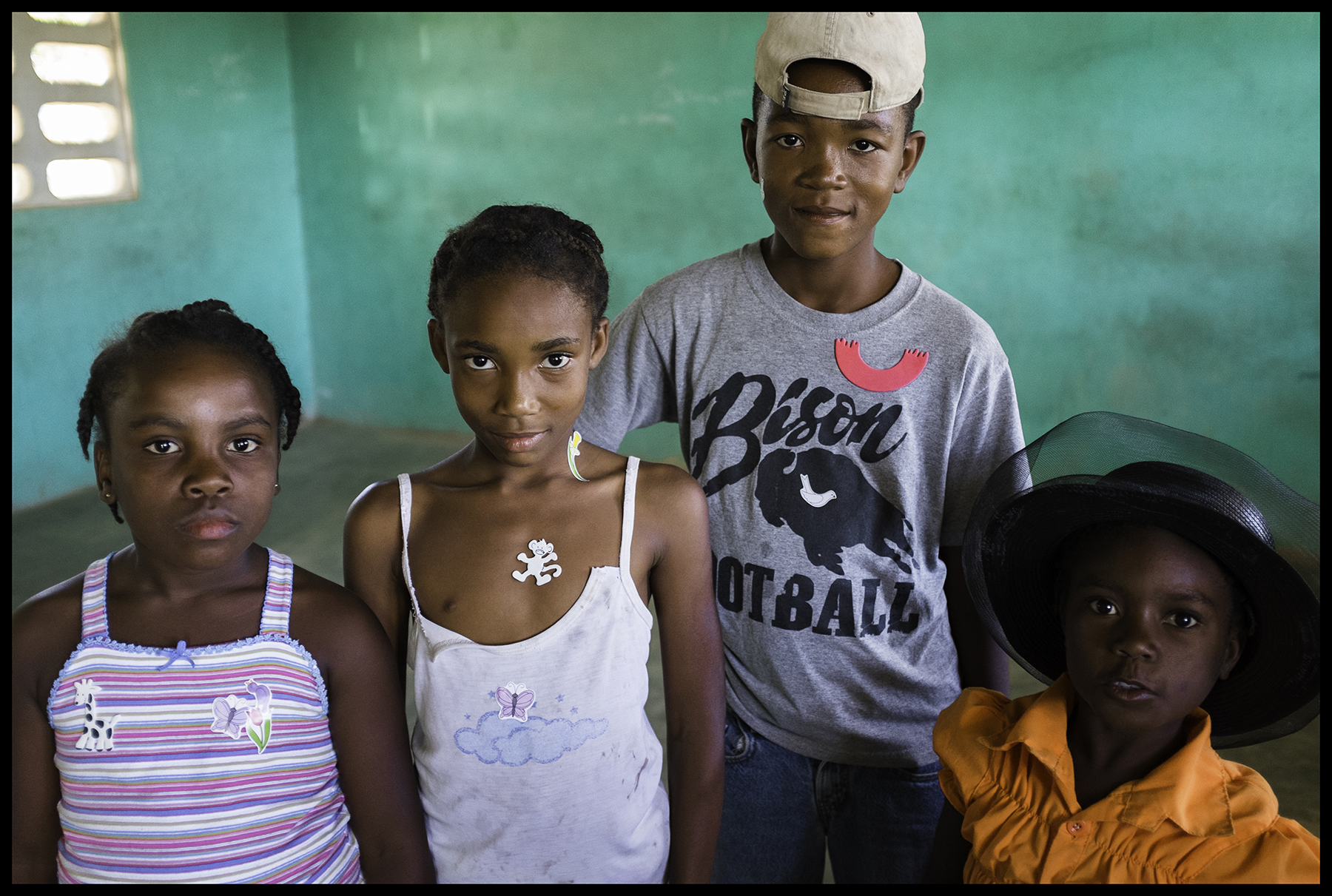 That relationship would become even further complicated. From 1915 to 1934, Haiti was occupied by U.S. Marines, sent by a government ostensibly to stabilize the spiraling nation, though the occupation—and its political manipulations and racist undertones—actually did much to protect and expand American influence there.

Couple all that with more than 200 years of roiling political instability, civil war and widespread poverty, and it is inevitable that Haiti today would be struggling.

Throw in regular battering by hurricanes, to say nothing of earthquakes, and it’s a wonder that the Haitians are doing as well as they are. Nor is it surprising that Haitian life expectancy is about 62 years, or that the adult literacy rate—around 49 percent—is among the world’s lowest, or that few Haitians have access to health care and safe water. One in five children under 5 years old has stunted growth, and 1 in 13 die before reaching that age.

Were it not for the presence of thousands of nongovernmental organizations—so many it’s been nicknamed the Republic of NGOs—and were it not for the incredible resilience of the Haitian people, the reality of Haiti would be far more grim than it is.

The GW group is here with Project Medishare, one of the many organizations working to keep this island nation from sinking under the weight of hardship.

Based at the University of Miami Miller School of Medicine, Project Medishare came to Haiti in 1994, long before the NGO influx that followed the 2010 earthquake, and runs programs in Hospital Bernard Mevs, in Port-au-Prince, and here on the Central Plateau, where it works with the Haitian government and other medical NGOs to provide rural health care.

One of its efforts involves bringing groups of nursing, medical school and public health students and professors from nine U.S. universities, including GW, which has been sending teams to Haiti for more than a decade.

'This, For Me, Captures the Bright, Sunny Side of Haiti​' 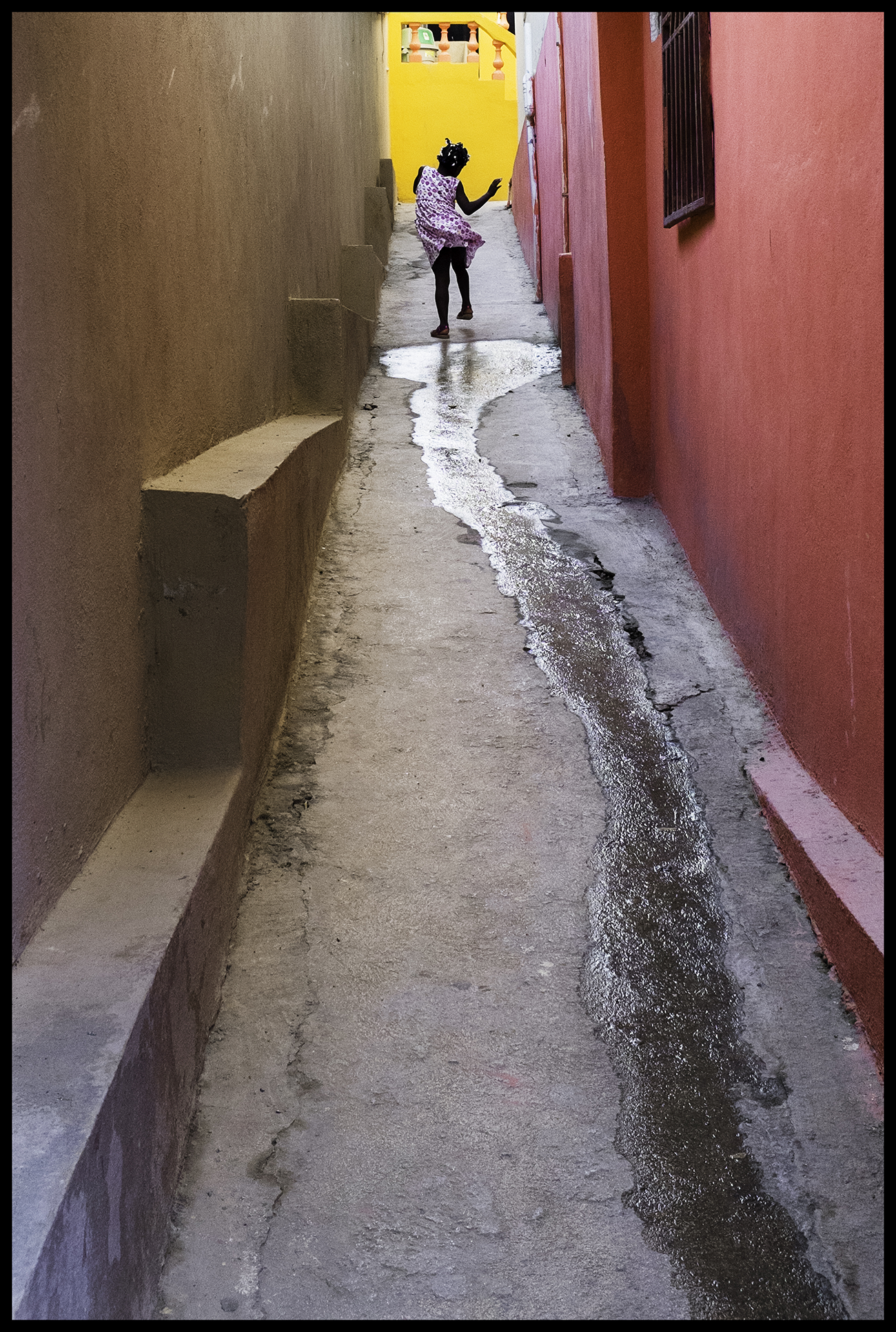 The faculty members on this trip have few illusions.

“What we hope to get out of [these trips] is that we were providing a medical mission and doing sustainable work,” says Professor of Nursing Joyce Pulcini, the leader of the group. “But I think the education [is] more sustainable than the clinics,” she says. On past trips, students seemed to return disillusioned. “They ask, ‘What did we really do? We give out medications for 30 days and then there’s no follow-up. We didn’t do harm, but …’”

The added work to educate patients and first-line health workers helps to buffer that. Medical aid workers will leave, but the knowledge will stay, and has the potential to spread. On this trip, that has made a difference for the students, she says.

Later on that second day, as the light fades behind palms and other tropical foliage, and a breeze keeps the evening mosquito-free, the group gathers under the portico of the Project Medishare guesthouse in Thomonde with eight of the organization’s Haitian health care workers. This evening, and on three other evenings this week, students give presentations—on anemia in pregnancy, on Ebola, on proper umbilical cord care and on hypertension. They work to dispel myths and misinformation to which some of the Haitian health care workers cling.

Later in the week, the students will offer presentations at a community gathering, complete with demonstrations, to teach the value and technique of such basics as proper hand washing and tooth brushing.

Karen Dawn, an assistant clinical professor of nursing who is on her fourth trip to Haiti, says the faculty has worked closely with Project Medishare over the years to continuously adjust the work of the students based on needs and maximizing impact.

“Over the past two January nursing trips, we’ve identified a need for sustainable interventions geared towards several repeated health issues that we see in these communities: hypertension in the adults, diarrheal diseases in the children, oral care, umbilical cord care and nutrition, just to name a few,” Dr. Dawn says.

The following afternoon, after a four-hour clinic session in a rude wooden church in a rural area near Thomonde, the students gather outside their guesthouse to debrief.

“What were today’s high points, and what could we do better?” Dr. Pulcini asks.

“I think my low point was the language [barrier],” says undergraduate nursing student Tiffani Houston, “not being able to communicate as well as I wanted to.”

“One high was how well we all worked together,” says Dayna Leis, another undergraduate. But she agreed that the need for more translators was an obstacle.

Dr. Dawn had spent part of the afternoon’s clinic session dealing with another of the inescapable conundrums facing aid workers the world over.

For most of the session, an elderly woman in Sunday best—like nearly all the clinic patients—lay in obvious distress, alone on a cotton quilt spread in a shady area behind the church. Dr. Dawn found herself repeatedly glancing at the woman, who was visible through the open rear door of the church. Finally she could stand it no longer, and left the students to go tend to the woman on the quilt. She returned to the makeshift clinic after a while, sitting down on a bench, shaking her head. 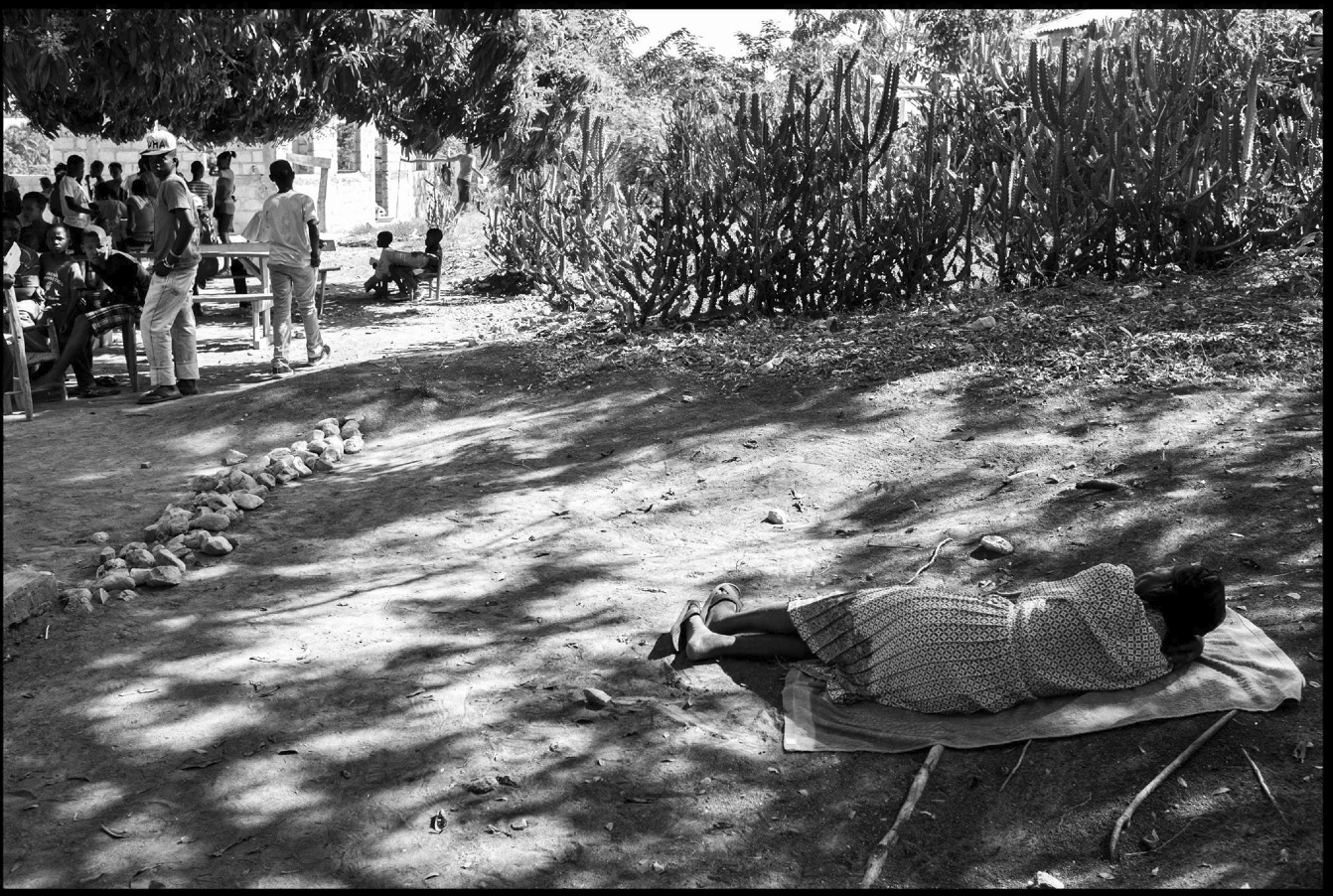 “She looks to be in her 70s, but you really can’t tell,” Dr. Dawn tells me, “and she’s obviously in respiratory distress. She belongs in the hospital. Her family is trying to figure out how to help her; it’s very complicated for them.”

Dr. Dawn explains that she found a nephew of the woman’s, who said that the family had the $2.40 needed to have her taken to the Partners In Health hospital in Cange, about 30 minutes away, by one of the region’s ubiquitous motorcycle taxis. But, she says, they didn’t have the money to have her admitted to the hospital.

Plus, Dr. Dawn says, in Haiti families are expected to pay for food for hospital patients, and the family can’t afford it.

“I really don't know what to do,” she says, clearly troubled. “I can easily give them the money, but then what?”

If she did, she wonders, “the next time someone here gets sick will people just wait for them to get sicker, thinking that some foreigner will come along and pay for the care they need? What does that do to the natural balance of things here?”

She gets up and goes back to talk with the woman’s nephew.

When Dr. Dawn returns, she looks somewhat relieved, but still perplexed. “I gave them the money,” she says, “and the family has arranged for her to get a ride to the hospital. She’ll be taken care of. But I wish I knew that I’ve done the right thing,” she says.

And so it goes, countless times each day, a short two-hour plane ride from Miami, and a world away.


Listen to Mr. Colen talk about his time as a student at GW.

B. D. Colen, BA ’73, who teaches documentary photography and science writing at the Massachusetts Institute of Technology, spent 27 years at The Washington Post and Newsday, where he shared a 1984 Pulitzer Prize for general local reporting. This was his second trip to Haiti. See more of his photography.