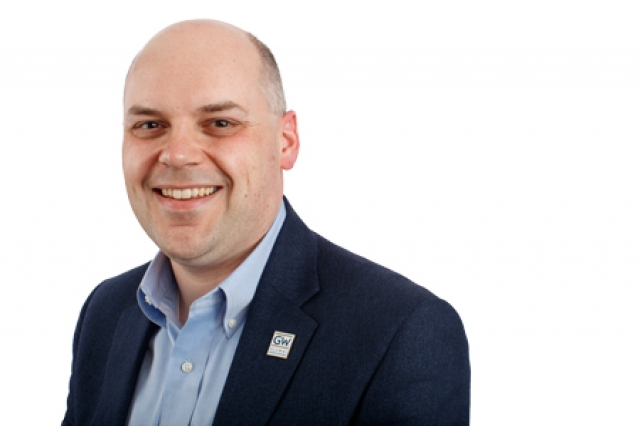 HIS DAY JOB is a senior vice president at Edelman, a PR firm, but OTHERWISE he's just your everyday, regular 37-year-old upstate New York native (town of Sodus) who sings tenor, adores his alma mater and once served as campaign manager for a friend's New York State Assembly bid.

"I'm pretty much defined by my love for upstate New York, GW and symphonic music," MR. GOSBEE SAYS. "That's kind of what I'm all about." But that's NOT QUITE ALL ...

Mr. Gosbee dreamed AS A KID of being president of the United States. He served as student council president at Sodus Central Jr./Sr. High School and managed the logistics of the senior prom. He booked the venue, the catering and kept the proceedings onbudget. The music leaned Boyz II Men because it was 1995. "My musical tastes are a lot more diverse these days," Mr. Gosbee says. 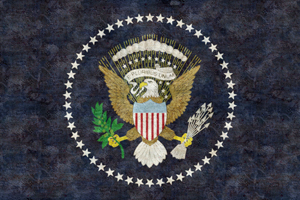 By the time he GOT TO COLLEGE, Mr. Gosbee no longer had Oval Office ambitions—too much media exposure. Instead he went behind the scenes politically, working in the GW Student Association as a campaign manager. He loved it. "I didn't want to be the guy out there in front," Mr. Gosbee says. "What I wanted to do is be the guy behind our guy out there in front. I was much more interested in the operations of this stuff and governing and campaigning, as opposed to being the guy on TV."

AFTER COLLEGE, there was more GW. Mr. Gosbee got a job in Alumni Relations before going pro as a campaign manager for six months in 2002. Then in 2003, he switched to grassroots advocacy for PR clients, combining his twin loves of politics and business. It also meant a job in nonelection years, which is nice. "I didn't really like the transient nature of that industry," he says.

Mr. Gosbee has played trumpet off and on SINCE THE FOURTH GRADE—but not since performing at a vow-renewing ceremony for his grandparents' 50th wedding anniversary. That was 10 years ago. And his grandmother asked him to. Still, he loves John Williams film scores and laments never mastering this one part in the Jurassic Park theme. He does sing, though—mostly sacred music in the Cathedral Choral Society. He also likes Fall Out Boy. "For somebody my age and at my place in life, I know more ... about pop singers, I think, than a lot of people do," Mr. Gosbee says. "So I'll take some grief for that occasionally. It's just cultural awareness."

SPEAKING OF CULTURE, Mr. Gosbee travels. A lot. He has climbed Mayan pyramids and taken a helicopter to the top of an Alaskan glacier, where he rode a dogsled. He's also been to, notably, Jamaica, the Cayman Islands, much of Europe— Brussels, Dublin (his favorite), London, Munich, Paris, Prague, Rome—and Argentina. He went on a Baltic Sea cruise in August. And maybe, he says, if he's ever home long enough, he'll connect with his inner Bob Vila (Mr. Gosbee has watched This Old House for years) and indulge his homeimprovement fantasies. "I always have these grandiose visions of doing renovations and all that stuff, and then I start getting to the actual work," Mr. Gosbee says. "And I think I'm like a lot of people who try DIY. You start opening a wall and realize you're in over your head and just never finish the project."