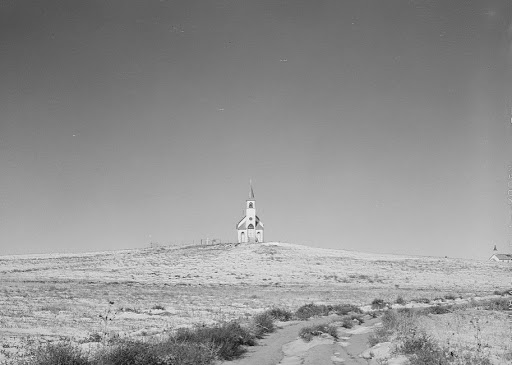 Fifty years ago, Bury My Heart at Wounded Knee took a sledgehammer to the narrative of how the American West was won.

Written by GW alumnus Dee Brown the book details how white Americans, often fueled by lust for land and gold and certain in their Manifest Destiny, destroyed the lives and cultures of Native Americans over three short decades in the late 19th century.

“This is not a cheerful book,” Brown, BA ’37, writes in his introduction.

Bury My Heart at Wounded Knee, published in 1970 and at time when the civil rights movement and Vietnam War were already sowing the seeds of cultural dissent, went on to sell more than five million copies and remains in print.

If the book’s grim tale of genocide seems unlikely grist for a bestseller, Brown was perhaps an even more unlikely author. He was not Native American and was not a Westerner. Born in Louisiana and raised in Arkansas, he worked for more than 40 years as a librarian, writing more than 30 books after hours.

Brown, who died at the age of 94 in 2002, said in interviews that his fascination with the true story of Western expansion began when a childhood friend who was Native American told him the big screen’s portrayal of Indians in the then-ubiquitous Westerns was far from accurate.

To learn more about the book, its impact and how it holds up today, GW Magazine spoke with Professor of History David Silverman, who specializes in Native American and American racial history. 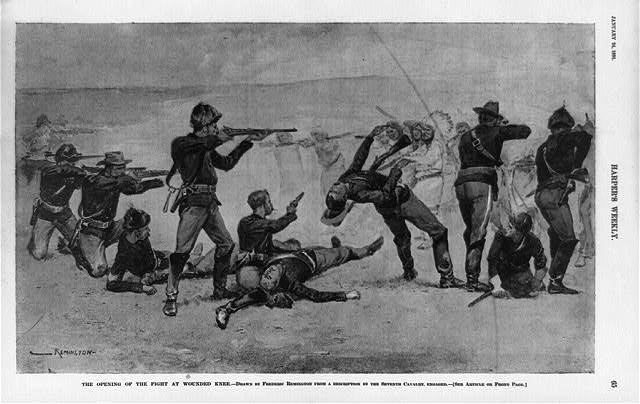 This illustration from 1891 depicts the start of the Wounded Knee Massacre.  (Library of Congress)

What was the reaction to the book when it was published?

It was big, no question. It turned the patriotic view of American history on its head and laid bare the highly imperial and inhumane treatment of Native Americans in the mid to late 19th century.

The book came out during the Vietnam War and as the civil rights movement had exposed the injustice of the Jim Crow South. There was also a Red Power movement in which American Indians were saying we’re still here and we want our rights as Americans. It was a time when there was a lot of disillusionment with the American ideal.

And Bury My Heart at Wounded Knee has continued to have an impact for the past half century. Over 50 years, it’s never been out of print.

How were Native Americans viewed in 1970?

At the time, for much of white America, Indians were relics of the past. They were foils in the stories Americans like to tell themselves about our nation’s history.

In fact, the most powerful force for people’s notions of what Indians were like were Western movies where stereotypes—like all Indians had long braids, rode horses and wore feathers—prevailed. Indians were also portrayed that way in magazines, comic books and advertising.

The Native Americans actually living in 1970 were mainly segregated and ignored. They weren’t seen as part of the contemporary American fabric and were often invisible to non-Natives.

How do you think Bury My Heart at Wounded Knee stands up today?

It’s dated in some respects. First, Native people certainly were victims, but in the book they were just acted upon. They don’t act. They don’t fight for themselves. They’re passive and gullible. It’s too simplistic and not the complete story.

Nowadays, for example, historians emphasize that powerful Plains tribes such as the Lakotas, Comanches and Blackfeet were harnessing the power of horses, guns and long-distance trade to expand at the expense of their indigenous neighbors at the very same time that the United States was expanding in the West. Though the U.S. was much more populous and powerful than these indigenous nations, they put up a stiff resistance to the Americans based on their own imperialist ambitions.

We’re also increasingly aware of the ways that the U.S., as with other colonial powers, managed to secure the assistance of some indigenous groups against other indigenous groups. It was able to use this kind of divide-and-conquer strategy because indigenous people considered their community identity to be much more important than any sense of being Indian.

Also, Wounded Knee was not the end of Native American history as the book implies. Native Americans passed through the apocalypse and are very much here today.

I was somewhat surprised to learn Dee Brown is white. Do you think it makes any difference?

Yes, but whether it should is another question. When it comes to Native American history there’s a widespread belief that being indigenous gives you insight into past events. We don’t apply this standard to other fields, for example, if someone who is not Anglo-Saxon wants to study British history, we don’t think twice about it. I experience this firsthand as a white man who studies Native American history. People will sometimes ask me if I’m Native even though my last name is Silverman.

What myths do we still have about Indians?

There are contradictory ones such as that all Indians live in fourth-world conditions but also that they are rich on casino winnings and government handouts. Or that they are all frozen in time and every Indian looks the way a traditional Plains Indian did (dressed in deer skin, moccasins and feather headdress).

Many Americans don’t understand the difference between being descended from Indians and being a member of a Native tribe. One is a question of ancestry, and the other is a political affiliation. It is possible to be of Native American descent and not be an enrolled member of tribe. It is also possible to be an enrolled member of a tribe with little Native American ancestry as, for example, in the case of person who descends from a tribal member in the 19th century but whose more recent ancestors come from a variety of other groups.

Any books (including your own) you would recommend for people who want to learn more about Native Americans and their history?

Start with the Ojibwe writer David Treuer’s recent Heartbeat of Wounded Knee. Its title is a conscious play on Brown’s Bury My Heart at Wounded Knee, and it brings a much different updated, Native-centered perspective. It’s about modern indigenous people having made it through the apocalypse of the late 19th and early 20th centuries to a point where they can be confident of their futures as modern indigenous nations. The question is what that modernity will look like, and Native people are generating lots of fascinating answers.

As for my own titles, check out my most recent discussion about the history about the actual “first Thanksgiving” and how the mythology around it has affected the Wampanoag people and American society in general. The title is, This Land is Their Land: The Wampanoag Indians, Plymouth Colony, and the Troubled History of Thanksgiving.

Top photo: This church in Wounded Knee, S.D., was photographed by John Vochon in 1940. Vochon worked for the Farm Security Administration and is known for his photographs of American rural life. (Library of Congress)