With more than a hundred marathons underfoot, and counting, George Banker, BBA '84, keeps his focus on the long haul: 50-mile "ultramarathons" and a sweatshirt that money can't buy. 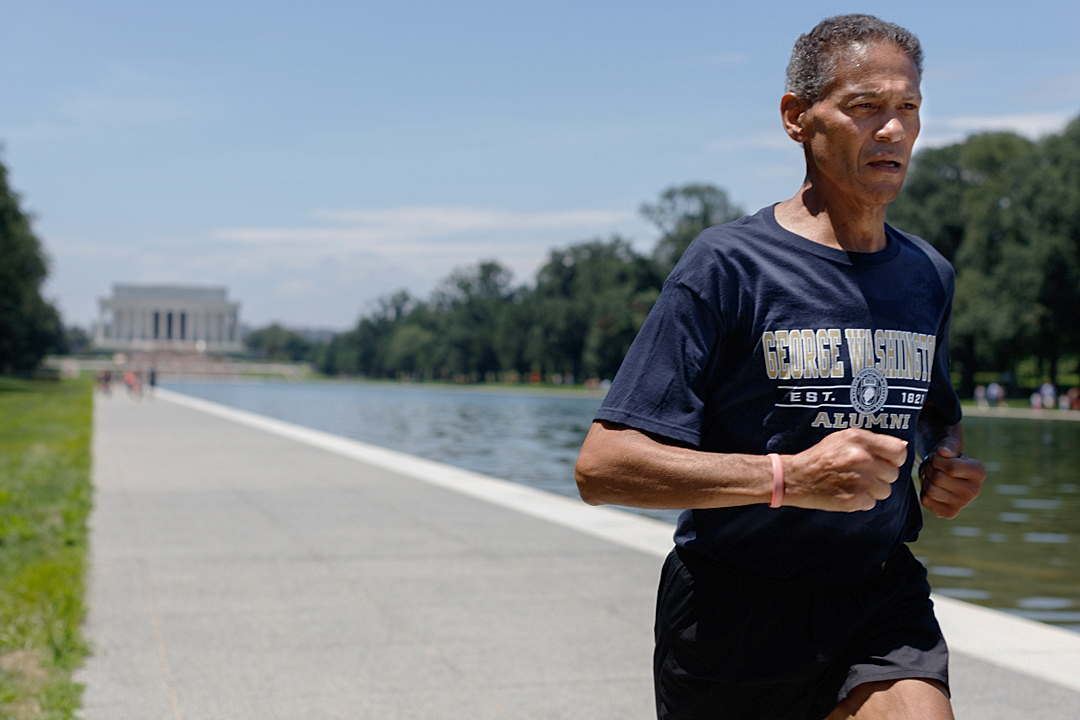 There was an older guy who worked in a Bethesda, Md., IBM office in the early 1980s. He looked slow, moved slow, had gray hair. He is the reason George Banker, BBA '84, started running.

"They had this one-mile fun run, and they said that every year [he] won it," says Mr. Banker, who worked at IBM for 25 years. "I said, ‘Wait a minute. How can this old man be out here winning this thing every year?'"

Sizing up the competition, he decided that he could win it.

Instead, Mr. Banker says he got "eaten up" by the mile, en route to a time not worth the brain space to remember. But never again.

In the 30-plus years since, the 65-year-old Mr. Banker has become a most devout and accomplished disciple of distance running.

At his peak, Mr. Banker ran a mile in less than six minutes. He's completed 102 marathons since 1983, including 31 Marine Corps Marathons, undeterred by a first go at the 26.2-mile haul that ended in a full-body muscle cramp—the result of dehydration—that shut down, Mr. Banker says, even his eyebrows.

Mr. Banker has also run nine 50-mile "ultra-marathons," completing seven, while becoming a behind-the-scenes force in the D.C.-area running community as a journalist and historian. He works as the operations manager for D.C.'s annual Army Ten-Miler race and has kept records for countless other organizations and races, including the Marine Corps Marathon for more than two decades. He authored a book on the 39-yearold race, The Marine Corps Marathon: A Running Tradition, in 2007 and is a member of the MCM Hall of Fame, inducted in 2011 for his all-around contributions.

Mr. Banker's next marathon is the MCM on Oct. 25. His next 50-miler is the JFK 50 Mile race in Maryland on Nov. 21, less than a month before his 66th birthday. If he finishes, it will move him to within two races of a coveted sweatshirt, given only to runners who've finished 10 races. He'll be in the JFK 500-Mile Club.

"I want that sweatshirt,"Mr. Banker says. "Sounds crazy, [but] you can't buy these shirts."

The ultra-marathon training is brutal, and for Mr. Banker it means running 100 miles a week. In June he was doing, by his standards, a "pitiful" 40 miles per week. In the past, he says, he's averaged 85 miles per week.

That sweatshirt represents the opponent he's always trying to outrun—taking his 6-foot, 155-pound austere body, the excess eroded by the miles over cement, asphalt, and splendor unmolested—since he gave up smoking a pipe and drinking Chivas Regal not long after that first fun run.

Persistence got Mr. Banker through GW—after eight years, taking one class per semester while working full-time—and it will get him that sweatshirt. Running's appeal, Mr. Banker says, is that it's something he can control. It's a competition against himself, foot v. mind, and now, at age 65, that's true more than ever.

"As far I'm concerned," he says, "there's only two goals: one's the start and one's the finish. That's it."