Mounir Alafrangy, MS ’18, spent 45 days in isolation with three people as part of a NASA program studying a red planet mission’s effects on human physiology and the human mind. 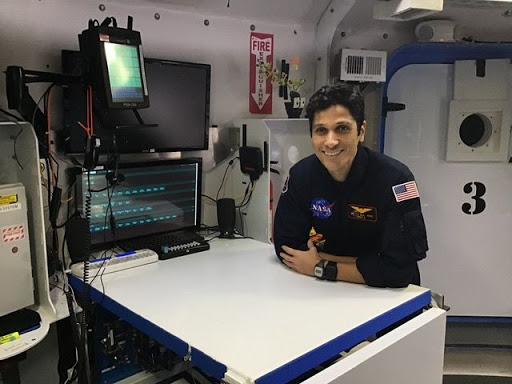 When he arrived home after a 45-day NASA mission, Mounir Alafrangy had a new appreciation for Earth’s blue skies, good food and instantaneous communication with his family. But unlike most astronauts who gain this perspective, Alafrangy never left the planet. His mission was a simulation—one designed to be as close as possible to a real mission to Mars, from the isolation and bland food to the technical tasks and even the views of the red planet approaching.

Alafrangy—who received his master’s degree in mechanical and aerospace engineering at GW in 2018—is now taking the lessons he learned during this mission and using them to design new technologies to be used on future spaceflights.

“The psychological impact of an experience like this is pretty grave,” says Alafrangy. “But I would definitely do it again. The more I learn about what astronauts go through, the better I can help and assist them.”

The mission that Alafrangy participated in—dubbed Human Exploration Research Analog (HERA) Mission XX—was the 20th such simulation held at NASA’s Johnson Space Center in Houston. Alafragy learned about HERA a few years ago when his fiancée heard a lecture by a HERA scientist. He was instantly intrigued.

“I’ve always been interested in human space exploration and contributing to it in any way I can,” he says. “I really wanted to get an insight into what it’s like. What happens when those doors shut and your mission begins?”

NASA sets rigorous criteria for HERA participants; it takes a certain kind of person to thrive during a space mission, and administrators aim to have HERA crew be as close to “astronaut-like” as possible. After all, the purpose of having the HERA missions is to work out kinks in spaceflight when it comes to human psychology, teamwork, communication and performance.

Before being selected for HERA XX, Alafrangy had to go through about six months of physical and psychological screenings, including both virtual tests and in-person interviews.  His health, type A personality and self-proclaimed “space geek” background helped him make it through the process, and in early August, 2019, he flew to Houston to begin training. Two weeks later, Alafrangy and three other crew members stepped through an airlock and boarded the 500-square foot HERA module.

The module, a round two-story structure which looks—unsurprisingly—like something straight off a spaceship, is parked inside a massive research building at the Johnson Space Center.

HERA XX was a simulated mission to Phobos—the larger of Mars’ two moons—had a goal of testing what happened to the crew, and their performance, if privacy was reduced even further than on previous HERA missions. Partitions that had separated bathroom sinks and sleeping quarters from the rest of the module was removed; the only private areas were for a toilet and a small shower. NASA engineers wanted to know exactly how much space and privacy is needed for astronauts to thrive during a mission.

“We didn’t experience the altered gravity or radiation that astronauts are exposed to, but we did experience confinement, isolation and perceived distance from Earth,” says Alafrangy. A screen inside the module showed Earth getting smaller and, by mid-mission, revealed views of Mars approaching. “We knew it was just a simulation but you really do start to lose track of reality and get submerged in the simulation, so when we saw Mars for the first time we definitely got excited.”

Alafrangy and his colleagues weren’t just relaxing and watching Mars approaching, however. They were assigned jobs and tasks that filled most of their waking hours, he says. Some involved keeping their module operational—running regular checks of the water and air systems, for instance. Others involved carrying out experiments that might be tagging along on a spaceflight. And many were in-depth simulations of more large-scale operations: landing the module on the moon while managing fuel levels, scanning solar panels on the International Space Station to look for cracks or debris, or grappling cargo with a large (simulated, of course) arm extending from the space station.

“We really enjoyed some of the jobs a lot,” says Alafrangy. “NASA picks competitive people and even during a simulation, we took these tasks very seriously and it was a big deal to mess something up.”

Once a week, the crew got a chance to talk with someone from home for half an hour—a time that went by far too quickly, Alafrangy says. But limited conversation with family wasn’t the only psychological challenge, he adds. Even though the crew got along well, spending 45 days in tight confinement with anyone sheds light on just how critical good communication is.

“The psychology can be difficult. Trying to pinpoint why someone woke up in a bad mood can be really hard, and you can’t just walk away from someone to take a break and reset.” Crew members were given team-building activities and learned conflict resolution techniques that helped them connect to each other when personalities clashed, Alafrangy says.

It was that aspect of the mission that Alafrangy thinks he can help improve for future astronauts, by combining decades of psychology research with cutting-edge artificial intelligence technology. Alafrangy is now the space exploration lead for Mosaic ATM, a Virginia-based company that develops technologies for aviation and spaceflight. Alafrangy and his team there are working on an artificial intelligence system that could monitor crew members’ behavior and progress during a space mission—or be used in other Earth-based stressful environments to track psychological status.

“The idea is that the system could start to understand how each person operates and then if someone starts feeling off, that will show up in their interactions with other crew members or in their work,” says Alafrangy. When the system pinpoints a problem among crew members, it could signal the crew to carry out some well-researched interventions—easy communication exercises to get people talking and feeling more camaraderie. Even something as simple as sharing a favorite memory with each other can get astronauts out of a communication rut, he says.

When he walked off HERA XX, Alafrangy says he had a new tolerance for people’s diverse communication styles and was better at compartmentalizing difficult tasks. Plus, that azure sky above.

“I love space, I love exploring other planets, but there’s nothing like the blue sky of Earth,” he says.