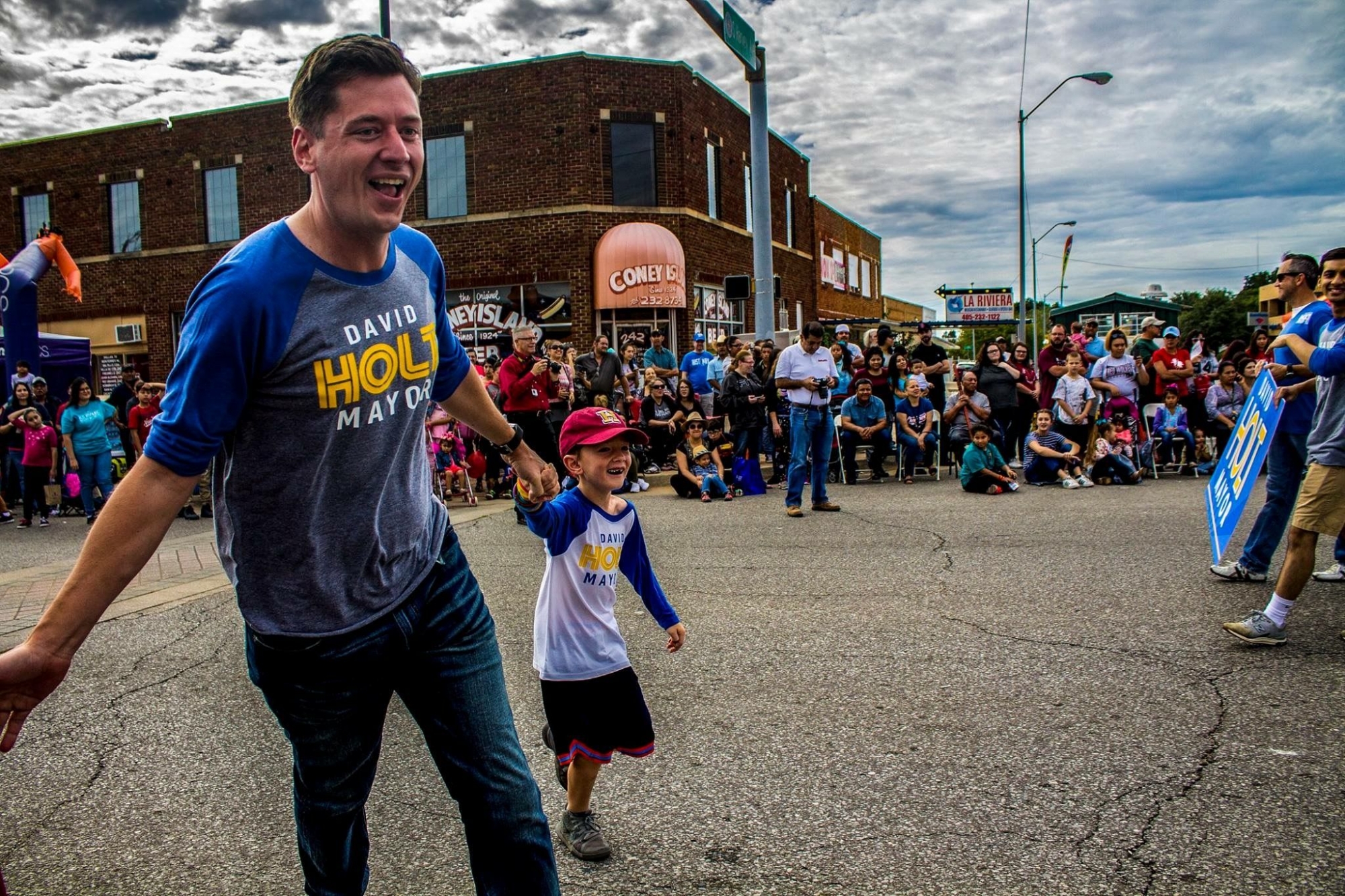 In March, David Holt, BA ’01—Oklahoma City’s youngest mayor in nearly 100 years and the first Native American to hold the office—found himself, thanks to the NBA, at ground zero for America’s coronavirus shutdown.

After filing paperwork to run for the Oklahoma State Senate in 2009, David Holt cried in his car as he pondered what his candidacy would’ve meant to his late mother. Family lore had it that Mary Ann Fuller Holt, BA ’66, turned down being the executive assistant to a state senator to raise her son, an only child born in 1979. The wheel came full circle as Holt, BA ’01, won the state senate seat, and then at 39 in 2018, he became Oklahoma City’s youngest mayor since 1923 and the first Native American to hold that office.

“It was very emotional for me,” Holt says. “Now it’s compounded many times over being the mayor of America’s 25th largest city. It’s beyond anything she could have imagined. I wish she could have seen it.”

March 11, 2020—which Wired magazine later dubbed “the day everything changed” in an oral history of the day, for which Holt was interviewed—proved a challenge for Oklahoma City beyond anything its mayor, or other residents, could have imagined. That evening, a Utah Jazz player in town to play the hometown Thunder tested positive for COVID-19. The NBA postponed the game and soon thereafter, suspended the season.

Holt, who had been Hatchet sports editor and who had penned the 2012 book Big League City: Oklahoma City’s Rise to the NBA, had long thought that for a U.S. city to be considered top-tier, it needed to have its own professional sports teams. The Seattle Supersonics moving to Oklahoma City and becoming the Thunder in 2008 was the most significant, positive development in the city’s history, he wrote in the book. But he wasn’t expecting a pandemic to put Oklahoma City on the sports map.

“Our zeal to be at the forefront of American life has its ups and its downs,” says Holt, whose wife, Rachel Canuso Holt, BA ’01, is the interim executive director of the Oklahoma Office of Juvenile Affairs. “If we never had an NBA team then we wouldn’t have been ground zero of the nation’s awakening to this pandemic. I think our city wanted to be relevant, but maybe that’s not exactly what we had in mind. Nevertheless, that particular episode is fascinating as our little footnote in this pandemic history, and certainly was significant in the storyline.”

“That was definitely the start of quite a whirlwind for me, where for really two months, 24/7, it was COVID-19,” he says. “I feel an obligation, as I always have, to do all I can to get my community through its challenges.”

Like all other major U.S. cities, Oklahoma City has faced enormous challenges, during a period of civil unrest and a national conversation about race in America. For those with assumptions about what it means to be a Republican mayor in Oklahoma, Holt displays unicorn-like attributes.

He marched (masked) with Black Lives Matter protestors, telling one reporter, “I need to listen and I need to not react, and I need to accept that even if I didn’t consciously choose a world that has a great deal of injustice, I benefited from that injustice.” Holt also proclaimed “Indigenous Peoples’ Day” for the first time in city history and has supported LGBTQ and civil rights causes. And in 2014, Meet the Press host Chuck Todd (who attended GW) named Holt an Oklahoma “rising star.”

“I have long since passed the point where I feel that I am required to be some kind of reflection of a party platform. I’m the last person to convince anyone that if they like me, they should like Republicans. I’m not even sure they should,” Holt says. “I’m working in the best interest of Oklahoma City, which is a very purple city in a very purple country.”

In and around that purple city, the spotlight has taken a liking to Holt, who has been celebrity-adjacent throughout his political career. He recently participated in a socially distanced Flaming Lips concert in OKC from within a plastic bubble. The performance, filmed for The Late Show with Stephen Colbert, reflected the band’s “quirky vision of the COVID-19 concert experience,” reported Rolling Stone. (Holt can be seen around the 4-minute, 42-second mark in a video embedded in the article.) The bubble, blown up with a leaf blower, muffled and echoed his voice back to him, Holt recalls. 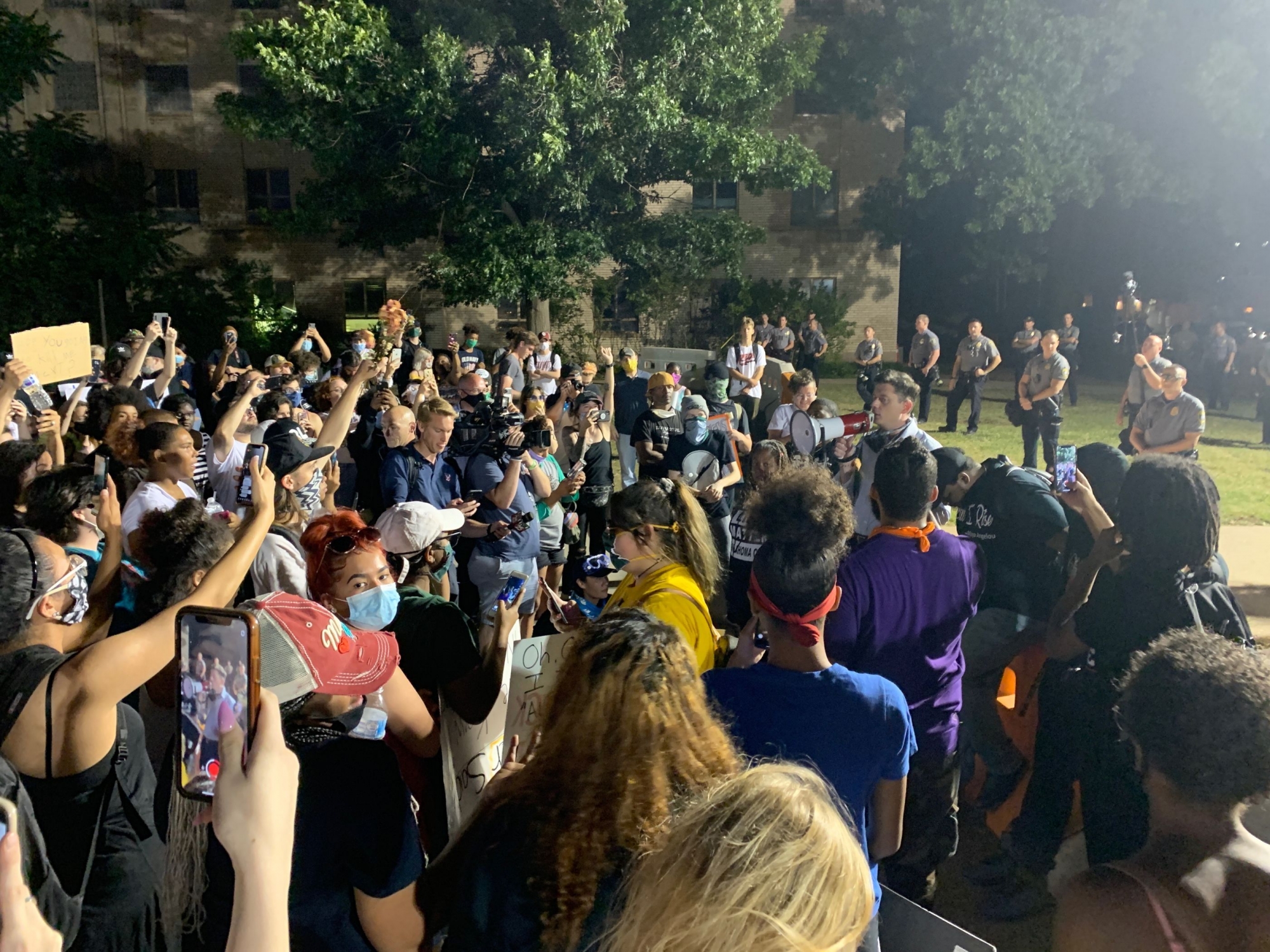 Holt hung out last year with Guy Fieri, who was recording a Diners, Drive-Ins, and Dives episode in Oklahoma City; and he was instrumental in bringing NBC’s American Ninja Warrior, a televised obstacle course program, to the Oklahoma Capitol grounds in 2016.

Holt laid the groundwork for that star-studded dance ticket during his last semester in Foggy Bottom, as an aide to the speaker of U.S. House of Representatives. (He subsequently worked in the East Wing in President George W. Bush’s administration.) In the speaker’s office, Holt was the first point of contact for visitors.

“I have pictures of me standing over my desk looking down on Ariel Sharon, a president of Uzbekistan, or the speaker of the house of Australia signing the guestbook,” Holt says. (Sharon was then Israeli prime minister.)

A prolific and conversational Twitter user, Holt distills nuanced civics lessons about how the city’s government works—and doesn’t work—with apparently endless patience. He started his Twitter and Facebook accounts in 2009, the year he announced his candidacy for the state senate.

“It seemed like that was what you were supposed to do,” he says. “I’m younger relatively, so I took to it faster, maybe, than other people in elected office.”

In Oklahoma, Holt has a reputation as one of the most-active on social media, and he has yet to tire of replying to people. “I recognize that is somewhat unique, especially for a big city mayor,” he said. “I still see things that I just can’t let go.”

He also draws telling comments from constituents. “I don’t always agree with you, but you got it right this time,” one wrote recently of Holt announcing a task force to examine reinstating the city’s Human Rights Commission, which was dissolved in 1996. “There are many things I disagree with our mayor [David Holt] about,” another wrote on a different occasion. “But I also believe elected officials should be acknowledged when they do the right thing. The mayor’s efforts to speak with protestors is one of those. Well done, Mr. Mayor.”

“Evidently, the voters in Holt’s district did not hold a political science degree against him as he won the primary by 28 points,” per the newsletter.

In addition to his academic training, the mayor’s heritage reflects that of many locals in a way that the city’s previous leadership has rarely done.

Holt says his Native American identity helps sensitize him to many city and state residents’ unique needs. Holt is Osage (pronounced “OH-sage”)—the same people featured in journalist David Grann’s 2017 book Killers of the Flower Moon: The Osage Murders and the Birth of the FBI, slated to become a Martin Scorsese film—on his maternal grandfather’s side. The Osage Nation, whose name means “children of the middle waters,” has some 20,000 members. It originated in the Ohio River Valley and migrated later to Missouri, per tradition.

That Oklahoma City hadn’t previously elected a Native American mayor might be counterintuitive to many.

“They think, ‘Well, Oklahoma. Doesn’t that have a lot of Native American history, and wouldn’t their capital city just naturally have elected Native Americans at some point?’” Holt says. “It really has just never happened.”

Thirty-nine tribes reside instate, but the city, being on “unassigned land,” lacks even one tribal headquarters. (Although tribes considered parts of the so-called Unassigned Lands to be part of their territory, the federal government evicted them; in the mid-1800s, parts of the state were given to tribes, newly relocated from other parts of the country. The parts of central Oklahoma that weren’t thusly allocated were called “unassigned,” Holt says.)

Although not raised culturally Native American, Holt says his maternal grandfather was educated at Native schools, and the mayor is very proud of his family heritage. He has a lot of empathy for his grandfather and his family, who weren’t treated as fully human.

Holt’s maternal grandfather, Leonard Fuller, was a bronze star-awarded career military man, who rose to colonel in the U.S. Army and served in World War II and in Korea. After retiring from the military in the 1960s, Fuller became head of the Model Cities program in McAlester, Okla. Model Cities was part of President Lyndon Johnson’s Great Society program.

Carl Albert was then McAlester’s congressman. “My mom came back from D.C. after graduating from GW and worked for him at Model Cities for a time,” Holt said.

The conversation returned to Holt’s maternal grandfather. “To think that he was able to overcome those challenges that I didn’t have to deal with, but to then have his grandson be the mayor of Oklahoma City,” Holt says. “When I look back now, I just have a lot of gratitude and a lot of respect for my ancestors.”