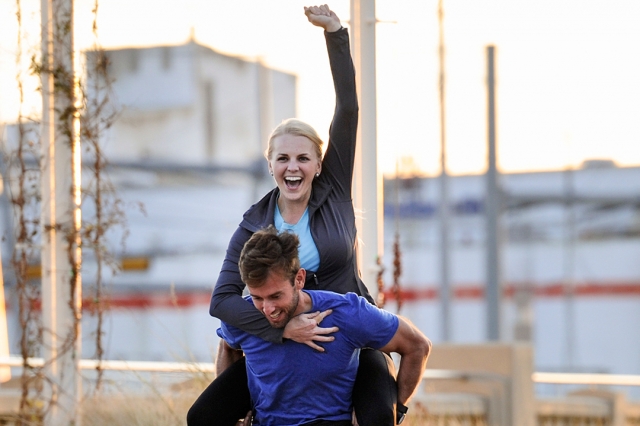 Blair Townsend, MD '12, is a man of adventure and tan year-round. He's climbed Kilimanjaro, he's skydived. He does triathlons, lives on a boat and once a month goes to sea in a nuclear submarine because he's a Navy doctor stationed at the Kings Bay, Ga., sub base. He's also a Navy diver.

"You just spend weeks getting beat up underwater," Dr. Townsend says of the six-month-long training. "They talk about testing your water confidence, and what do you do when you're scuba diving at X amount of feet underwater, and somebody's just beating you up and pulling the regulator out of your mouth or causing problems for you—are you the guy who panics or keeps his composure and doesn't bolt to the surface?"

"I was a little scarred for a few weeks when I got back," Dr. Townsend says with a laugh. "I need my space and independence."

Dr. Townsend competed on the 26th season of CBS' The Amazing Race, a reality show on which two-person teams compete in mental and physical challenges around the world to win $1 million. Traditionally the teams know each other, but for Dr. Townsend's season—which aired this spring—the producers made a tweak: half the teams would be on blind dates.

Dr. Townsend met his teammate, Hayley Keel, on the starting line. They were supposed to fall in love. They didn't.

"The biggest challenge of the race was working efficiently and successfully with a partner I didn't know," Dr. Townsend says. "And all the things that are historically hard, like the physical and mental challenge, didn't seem as difficult compared to the interpersonal relationship."

A longtime fan of the show, Dr. Townsend says he originally auditioned to be on with his father. When he found out it was the blind-date edition, he—man of adventure, remember—decided to do it anyway. The pair finished third, undercut by a big mistake on the second-to-last challenge. Dr. Townsend and Ms. Keel, a nurse from Florida, had a contentious (but also fan-favorite) relationship, now well documented on the Internet. Dr. Townsend says he and Ms. Keel are friends now.

"I went on the show mainly to do well on the show," Dr. Townsend says. "I figured the blind-date thing would take care of itself. I wasn't necessarily looking for love. I think some of the blind dates just went on because they wanted to find a partner. That wasn't really my objective. So I figured, however the cards fell, they would fall."