A look at the defense that almost didn’t work

Outwardly, Craig Jones, BS ’99, was an unflappable man, confident still in his master plan despite the fact it wasn’t really working.

Last season, the GW men’s soccer coach stuck to playing a defense that, well, stunk for the first five games. It gave up 11 goals, and the Colonials—who scored just twice in that span—started 1-4.

“When I walked out of the office,” Mr. Jones says, “I had to look like I was 100 percent still behind it, and there were days where I walked out of the office where I wasn’t—but I had to sell it to my guys. They never once thought I didn’t think it wasn’t going to work, even though in my mind, when I’d get in here … and look at my stuff and I’d be like, ‘We gotta think about, I don’t know, changing some of this up.’”

Mr. Jones resisted, and GW—committed to its aggressive, pressure-up-high defense—turned it around and, led by an imposing back line, went 9-4 the rest of the season to win the 2015 Atlantic 10 regular-season title.

Seven of those nine wins were by shutout.

It’s the culmination of a four-year rebuilding project during which Mr. Jones has rewritten program philosophy and overhauled the roster. 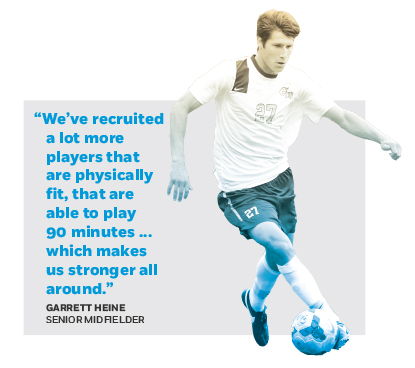 Taking over for longtime coach George Lidster—for whom Mr. Jones, a native of Merthyr Tydfil, Wales, played defender/midfielder from 1995 to 1998—Mr. Jones made GW’s playing style more possession-oriented, moving from the more direct, kick-it-long approach of his predecessor. Mr. Jones turned the offense-defense relationship more symbiotic by pushing up the defense and shortening the field. This is based on the simple axiom that it’s easier to score when the ball’s closer to the net.

In the A-10 tournament, GW lost in the quarterfinals to VCU, the eventual tourney runner-up.

The problem, though, is that when Mr. Jones took over, he didn’t have the personnel to play the possession-oriented style he prefers. He still needed big, fast guys; he just needed them to be more skilled with the ball. He also needed them to run more. And it took three years to get enough of these players and to build chemistry among them.

“We have a lot more technical players,” says senior midfielder Garrett Heine, GW’s leading scorer in 2015 (nine goals, 22 points) and a first-team All-A-10 pick. “We’ve recruited a lot more players that are physically fit, that are able to play 90 minutes without having to use too many subs, which makes us stronger all around.”

Mr. Heine, like Tobi Adewole—a senior defender, second-team All-A-10 selection and an anchor of GW’s heart-and-soul back line—is a product of a youth-soccer academy. Essentially a farm system for college and pro teams, the academy model was set up in 2007 by the U.S. Soccer Federation to bring the American system more in line with the world model and to shift the focus of youth soccer from games to instruction.

Now, there are thousands of academies, also called clubs. U.S. Soccer has its own academy, as do each of MLS’ 20 teams.

“I think the academy is the best way moving forward for youth soccer,” says Mr. Heine, who played for the San Diego Surf Club.

Mr. Jones says academies, which are sanctioned and monitored by U.S. Soccer, produce players that are more technically sound and more of them—making it easier to find the sort of players he needed for his roster reshaping.

This season, three of Mr. Jones’ eight incoming freshmen played academy soccer—one of them, Reese Moore, played in the system of the Columbus Crew, an MLS team—to help replenish a team that lost four starters.

“We don’t want to be the team that goes out and wins the regular season and then doesn’t do anything the next year,” Mr. Adewole says. “We want to build off that because we were seen as the underdogs last year, but [this] year, we’re not going to be seen as underdogs. People are going to expect what we’re throwing at them, so we’re going to play even harder.”

For updates on the men’s and women’s soccer teams this season, follow them on Twitter: @GWMensSoccer and @GWWomensSoccer