Honey Nashman at her home along Lake Barcroft in Falls Church, Va. (Photos by William Atkins)

The bench was in Foggy Bottom, somewhere around what is now James Monroe Park, a rectangle of grass bisected by Pennsylvania Avenue. On top of that bench, more than 100 years ago, slept a homeless, 11-year-old Polish immigrant.

There, just a year or two ahead of the university's 1912 move to the neighborhood, is where an extraordinary story begins. In the blocks surrounding the park, the boy's eventual daughter, Honey Nashman, would spend 43 years on the GW faculty. It's where she would cement an academic culture of "service learning." And it's where this past September, after she and her husband, Alvin, made a significant donation to support that culture, the university's Center for Civic Engagement and Public Service was renamed in her honor.

"She is a pioneer on this campus," says Peter Konwerski, a mentee who now is GW's vice president and dean of student affairs.

But Honey—"Call me 'Honey,'" she insists, and she is too delightful to turn down—has been more than a remarkable educator; she has led a remarkable life framed by the courage of her parents and her personal connections that have shaped her sense of community.

After a few weeks on the bench, Isadore Weinstein left Washington for Boston. There, he learned how to be a tailor by sewing linings into raincoats at London Fog. He eventually moved to Pompton Lakes, N.J., where he opened a small shop on Wanaque Avenue, and in 1934 married Rose Rothman, a Russian immigrant.

Isadore, bearded and long-legged, was almost Lincolnesque in appearance. He and Rose lived in an apartment above a drugstore, on the same block as his business.

"I knew everybody on that street—it was that kind of town," says Honey Nashman, who now holds the title of associate professor emerita of sociology and human services.

She was an only child and showed a precocious sense of empathy and an interest in the courage of others. Chief among them was her mother, who was diagnosed with breast cancer in 1940. Rose Weinstein would live 20 years with the disease (Sloan Kettering told her it was the longest case of cancer they had on record, Honey says). It instilled in her a deep appreciation for life.

"We would go for a walk and she would say, 'Stop, Honey, take a deep breath. Isn't this wonderful?'" she says. "Between the two of them—my father's appreciation for America and my mother's deep appreciation for life—I learned the importance of living with death close at hand and that it was important to make a difference in the lives of others."

She grew up an athlete on an all-boys block. Her father, a popular figure in town, was Babe Ruth's tailor. As a teenager, she befriended heavyweight boxer Joe Louis, who trained in Pompton Lakes. She would race home from school, grab her bike, put the family Bedlington terrier in the front basket and ride to Doc Bier's training camp to watch Mr. Louis practice. She sat ringside for his fights at Madison Square Garden, once beside Elizabeth Taylor.

Mr. Louis' bouts with German champion Max Schmeling in the late 1930s were laced with racial tension, but Honey also knew him as a philanthropist and human rights advocate. He held a charity fight to raise funds for the first ambulance in Pompton Lakes, and enlisted in the Army during World War II.

The two remained close for years, through Honey's time as a student at New York University in the 1950s. "I was an enormous fan of his," she says. "He promoted social justice. He really promoted democracy in America."

Relationships have shaped Honey's philosophy as an educator. Her approach blends personal, academic and moral transformation, says Amy Cohen, who serves as director of the Nashman Center.

"She sees the humanity and dignity in people," says Ms. Cohen, who has known Honey for 20 years. "When you talk to her, she is very present in the moment. She is really focused on the best for the student, the community and the academic mission. She holds all three things in her mind."

The world can be a coincidental place.

Honey did not know about her father's immigrant story until after she began teaching at GW in 1967. Once she arrived in Foggy Bottom, she never left.

She began working in civic engagement and philanthropy at GW by partnering with religious organizations on campus—among them, the Newman Center and Hillel—and serving on university committees, including the Black Peoples Union, in the 1960s and '70s. One of her mentors was Marcella Brenner, a professor and founder of GW's graduate program in museum education. Ms. Brenner invited Honey to teach a service learning class in the early 1980s.

"From that I developed an absolute love for scholarship of engagement," Honey says.

Service-learning was growing rapidly during this era, Ms. Cohen says. Campus Compact was created in 1985. Americorps launched less than a decade later. As the field evolved from singular, co-curricular service events to include faculty research and student scholarship, so too did the service topics, from prison reform to human trafficking to public health. Honey's students were among the first to conduct research on the caretakers of AIDS patients in D.C.

In 1993, she and Dr. Konwerski—then a graduate student—co-founded an office of community service at GW. Now the Nashman Center, it facilitates opportunities in academic service-learning, community service, service careers and social entrepreneurship.

"We are in nonprofit nirvana, more than 6,000 nonprofit organizations are in the Washington area," Honey says. "What better way for undergraduate students to weave their theory into practice?"

Transformation has followed—for the university, the students and the community. And for Dr. Konwerski. Together, he and Honey co-taught his first course as an instructor, in 1994.

"It was watching a master teacher connect with students," he says. "I think that was some of her best work, helping students realize how consequential the experience would be—and that it was OK it was opening their eyes to something."

She was affected, too. Students keep journals of their experiences, and reading them is an emotional undertaking. "You get to know them at such a deep and wonderful level that it's a gift," she says. 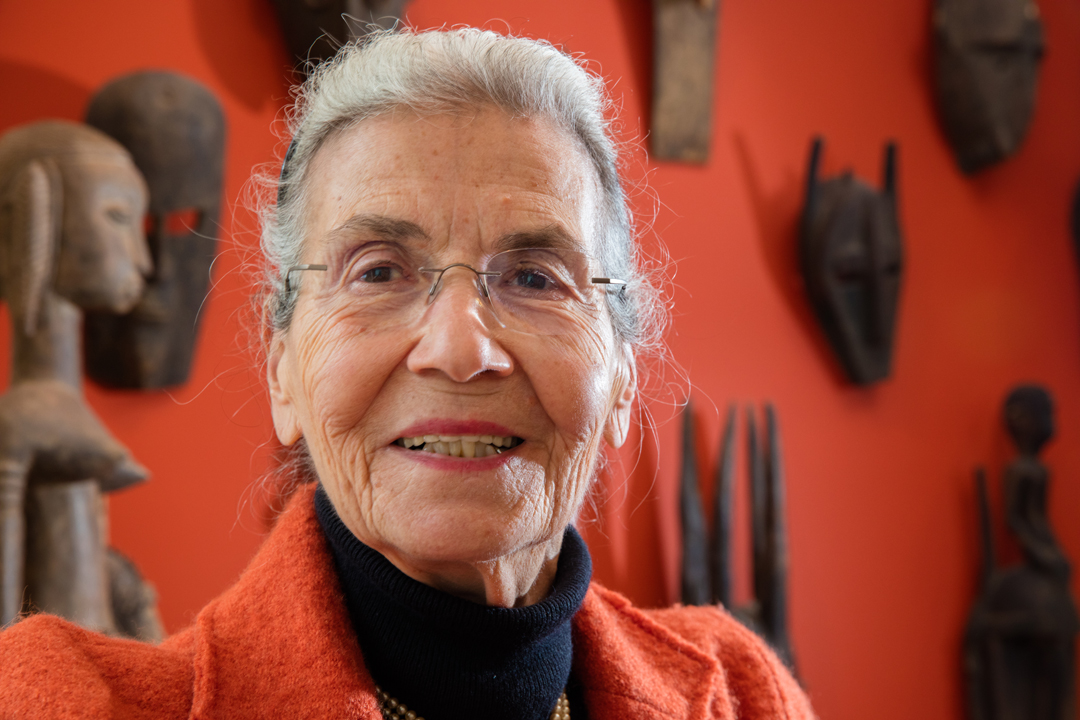 In time Honey's career, spent within blocks of where her father's American journey began, has overlapped those of her children and grandchildren. Her husband received an honorary doctorate from the university in 1986. All three of their daughters graduated from GW. A grandson, Jordan Chmara, is enrolled in the School of Business.

Two daughters live within blocks of the family home in Falls Church, Va., tucked in a wooded cul de sac on Lake Barcroft. The house is filled with handcrafted art, mostly from travels—wood masks from Mali, paintings and sculptures of animals—that reflect a love of creativity and humor. A small dish of shellacked mini bagels and combination locks sits on the edge of a glass desk in the study.

"That's my bagel and locks," Honey deadpans, breaking into a smile.

When the family gets together for dinner, she takes an empty bottle of Izze soda and puts a rose in it, so her parents can be at the table.

The house is made for activity. It's less than 100 steps from the deck door to a small dock, where the Nashmans keep their kayaks. The water is a special place for Honey—a rejuvenating experience. The property is eight miles from GW, but on a gray November morning, it could pass for upstate New York.

"Sometimes I'll paddle and push myself," she says. "Other times I just stop and sit. And it's just beautiful." A few times a month, Honey returns to GW for lunch or coffee with friends. Her presence, though, can still be felt every day—in the 70 academic service-learning courses now offered; in the more than 655,000 volunteer hours logged in 2014; and on the fifth floor of the Marvin Center, where her caricature hangs on the GW Wall of Fame. A block away, students criss-cross the University Yard on their way to class. Wood benches line the sidewalk waiting for someone to sit down. 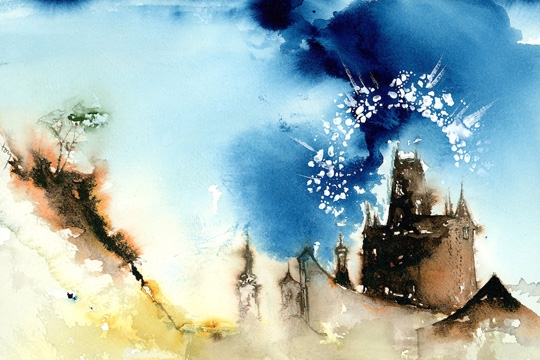 As a child in the 1950s, alumna Alexandra "Alex" Tolstoy created oil sketches of Rembrandts and of angels in Michelangelo paintings. 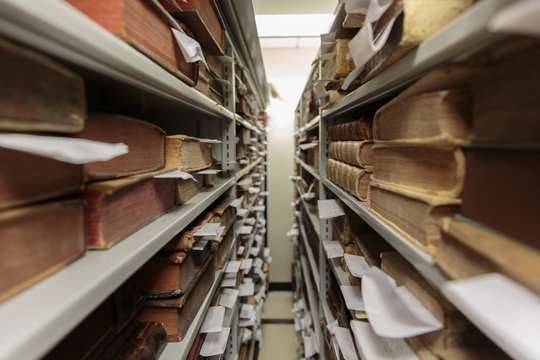 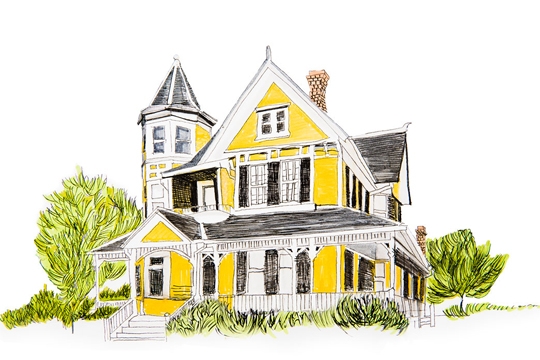