As a producer and writer on the PBS children’s show “Molly of Denali,” Princess Daazhraii Johnson, BA ’96, helps the first nationally distributed kids’ TV series starring a Native American tell stories from the perspective of her people. 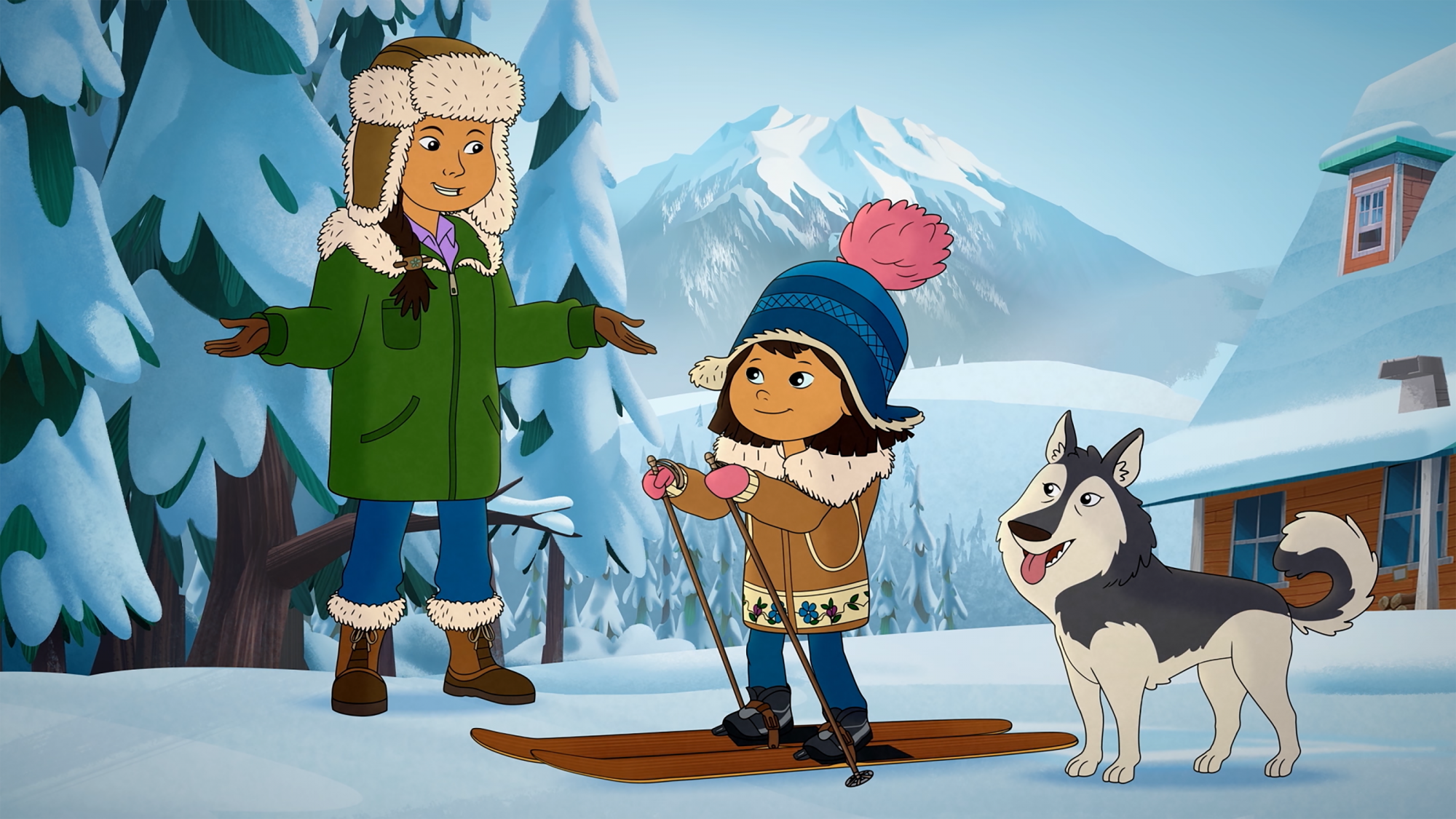 Growing up in Alaska, Princess Daazhraii Johnson, BA ’96, a member of the Neets’aii Gwich’in tribe, felt her culture was invisible.

In the public schools she attended in Fairbanks and Anchorage, she says, no one taught the history of her ancestors, or the history of the more than 200 Native cultures in the state. In the towns she lived in, she says, she never saw statues or plaques that recognized Alaska’s land as once belonging to the many distinct Alaska Native peoples. And on television or in movies, she says, she never saw actors who she felt represented her, only the stereotype of “cowboys and Indians.”

It wasn’t until she was 12 that she began to question the treatment of Alaska Natives and the missing pieces of her family’s history. Influenced by her grandmother, who wrote the first Neets’aii Gwich’in dictionary, and her mother, a writer and historian of Alaska Native history, Daazhraii Johnson would go on to tell stories based in truth and shift away from the dominant and antiquated narrative.

Today Daazhraii Johnson is a creative producer and occasional writer for the PBS KIDS animated series Molly of Denali, the first nationally distributed children’s series to feature a Native American lead character. It premiered in 2019 and so far has run for 31 episodes.

“From our very first production meeting, we said, ‘Nothing about us without us.’ We wanted to have Native people at every level of production, from acting and writing, to producing,” says Daazhraii Johnson, who President Barack Obama appointed in 2015 to serve on the Board of Trustees for the Institute of American Indian Arts. “To make sure we’re getting things right and authentic, it takes that level of participation.”

While previous stories on television or in movies have reduced Native Americans to stereotypes—the “noble warrior,” for example—the team behind Molly showcases contemporary rural life of Alaska Natives in everyday roles.

Molly of Denali has a reach of more than 40 million people, according to WGBH-TV, Boston’s PBS affiliate, which produces the show. That includes more than 700,000 Indigenous and Alaska Native viewers. The show also has 4.2 million podcast video streams and more than 17 million games played online and via the PBS KIDS Games app as of summer 2020. In June, the show won a Peabody Award, which highlights the most powerful and enlightening stories in television, radio and online media.

In a time when our country is having conversations about race and inclusion, Daazhraii Johnson is helping to upend Indigenous stereotypes, give Indigenous youth a role model who looks like them and introduce non-Native viewers to a new culture.

“Social justice, learning to be anti-racist, learning how to work together, cross-cultural communication, all of that is a practice: an ongoing, life-long learning experience,” she says. “And we’re all in the thick of it.”

Daazhraii Johnson has been her whole life. She says that when she applied to GW, her White high school classmates discredited her work ethics and good grades. She says they told her she could get in anywhere because of her Native background.

In college, she noticed a paucity of Native students. It was a culture shock. To find peers, she sought other people of color, eventually joining the Black Student Union where there were conversations about race, especially against the backdrop of the Los Angeles riots in the spring of 1992.

Academically, international business and travel intrigued her, even if it suppressed her interest in the arts. Her father had been an artist. But after graduating, Daazhraii Johnson says her career was circuitous. “I was all over the place,” she says, before abandoning her international relations career and embraced her original desire to go into the arts. She wanted to tell stories, so she participated in Sundance’s Directors and Screenwriters Lab, an initiative of the institute that supports artists and connects fellows with industry mentors. She eventually moved to Los Angeles, where she did whatever she could to be exposed to the entertainment industry, from acting to working as a temp at the major studios.

She had small roles in nearly a dozen movies and TV shows from 2005 to 2013 before moving back to Alaska to get a master’s in education at the University of Alaska-Anchorage, with a focus on environmental and science education, another lifelong interest of hers. The Arctic National Wildlife Refuge, known to the Neets’aii Gwich’in as “the sacred place where life begins,” is right in her tribe’s backyard. Spanning 19.6 million acres, it sits in Alaska’s northeastern corner, abutting Canada and the Arctic Sea.

She would go on to help to found the Fairbanks Climate Action Coalition, and she was working with the Cold Climate Housing Research Center, a nonprofit dedicated to the development of energy-efficient and cost-effective building technologies for people living in circumpolar regions, while Molly of Denali was being born.

The show was created after a request for proposal from PBS for a new children’s series to teach kids how to use informational texts, such as books, websites and oral histories. Co-creators Dorothea Gillim and Kathy Waugh (who have worked on other PBS shows, including Curious George and Arthur) combined their visions: Gillim’s desire to do a show about a girl who lived in a store, and Waugh’s idea about a girl who lived deep in nature and communicated with others via blog.

When the creators came to Alaska in 2016 to learn more about Native culture for the show’s production, Daazhraii Johnson thought her entertainment career was in the past. But when she saw the show’s job description for a creative producer, she thought to herself, “I want this.”

“I wrote a long letter about how I wanted to help shape who Molly was going to be, as well as inform a new production model,” she says. “Part of the reason we’ve had Native stereotypes is because we Native people have not been involved in the creation of the images. I saw this as an opportunity to end that cycle.”

Her background in acting, directing and writing qualified her for the position, and her personal experiences growing up as an Alaska Native woman helped deliver a realistic character. The result was a series featuring 10-year-old Molly, a Gwich’in/Koyukon/Dena’ina Athabascan girl with a vlog, whose family runs a trading post.

The show is set in present day, and episodes revolve around Molly’s indigenous identity as well as informational text literacy, which means the show teaches kids how to use tools like maps and internet search engines to solve problems. In one episode, for example, Molly uses a map of the land around her village to find and fix a wildlife camera live-streaming an eagle’s nest. Each episode includes two story lines as well as live-action depictions of real children and regions in Alaska.

Early on, Gillim and Waugh knew this wasn’t their story to tell, and they set out to involve Alaska Natives in all aspects of the production, both on screen and behind the scenes.

WGBH Boston developed the project with an Alaska Native working group, composed of more than 60 advisers, including elders. Today that group has members from every region in Alaska where the show takes place, and they continue to advise on many aspects, including culture and language, in order to ensure authenticity and respect to subject matters. There is also a fellowship for Alaska Native writers, and Atomic Cartoons, the lead animation company of the series, holds internships for Alaska Natives. On screen, every Indigenous character is voiced by an Indigenous actor, and the Molly of Denali theme song is sung by an Alaska Native group, Pamyua, with the Athabascan fiddle and traditional drum played by a Gwich’in musician, Brennan Firth.

As a creative producer, Daazhraii Johnson assists the core production team in casting and reviewing scripts for authenticity, but she also has written a few episodes. Her favorite is “Stand Back Up,” which highlights the first Gwich’in female Olympians, twin sisters Sharon and the late Shirley Firth, who competed in cross-country skiing at four consecutive Winter Olympic Games (1972, 1976, 1980 and 1984).

Some of the show’s episodes are unflinching in their true depiction of history. In “Grandpa’s Drum,” Molly learns about government-run Indian boarding schools, which existed from the early 1900s to the 1970s to assimilate Native Americans into the dominant culture. Students lost their identity, culture and language. It was a familiar story to Daazhraii Johnson, whose own mother attended such a school, where the punishment for speaking Neets’aii Gwich’in was a slap on the hand.

“The stories we tell through the show are a reflection of the heart and values of Alaska Native peoples—our truths, our histories and our experience,” says Daazhraii Johnson. “Through Molly, we get to show that we are still here, and we have so much to say about how we live.”

Top photo: A screen still from an episode of Molly of Denali (Courtesy Princess Daazhraii Johnson)