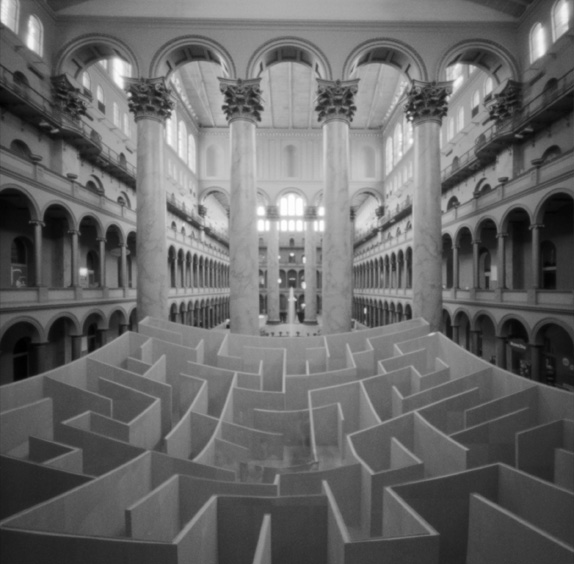 In Maze (National Building Museum), 2014, dozens of tourists traversing a labyrinth are reduced to wisps during a two-minute exposure.

Images from pinhole cameras, along with the toy cameras she sometimes uses, develop with an aesthetic that's like a natural version of Instagram. Their simplified or absent lenses—pinhole cameras are just a puncture in a lightproof box—produce distortions and leaking lights that give photos a hazy, dreamy quality coveted by iPhones everywhere.

Only, Dr. Breslin, RES '87, discovered the style way before Valencia filters hit the mainstream. The former doctor and faculty member left her career in psychiatry to find a new muse. It came in the form of photography—but she was attracted to techniques that few people were pursuing before the advent of digital shooting.

"As an artist, I don't want to capture the world how everybody else sees it, I want to show it to people in my own way," she says. "And things like the pinhole and toy camera are a little more whimsical." Dr. Breslin's first attempt, with a DIY pinhole camera, didn't work.

A few years later, with a purchased one, she tried snapping a photo of a friend at lunch. This time, the image seemed to capture an alternate reality: the subject slightly off-center in the frame like a ghostly cloud, while the rest of the picture remained acutely in focus.

Like ink blobs on a Rorschach test, the vapory blurs winding through her work allow viewers to bring their own experiences into the photograph. "These pictures are ambiguous and become a bit projective," she says. "You're seeing a kind of vague situation. It's not quite as literal so it becomes a little more imaginary, a little more fictional."