Dallas team president Grady Raskin, BA ’96, had built what had the makings of a successful franchise for the well-received second act of Vince McMahon’s infamous football league. Then the pandemic hit. 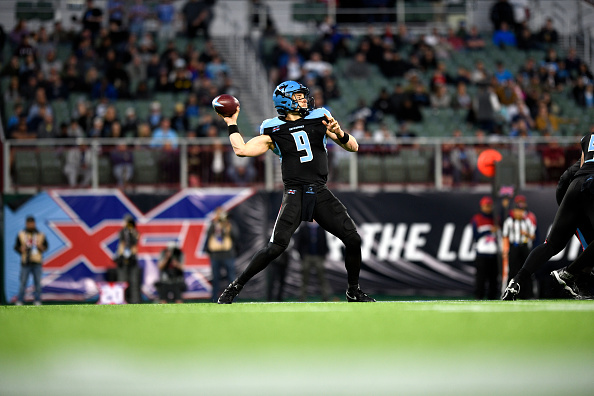 Through five games in early 2020, World Wrestling Entertainment magnate Vince McMahon’s rebooted eight-team league—he invested $100 million of his own money in the project—drew millions of viewers and maintained respectable attendance. Grady Raskin’s Dallas Renegades averaged 17,000 fans through three home games at Globe Life Park, the former residence of the Texas Rangers, and between 1 and 2 million television viewers—a ways off the NFL average of about 16 million per game but still promising for a new league.

“If you provide an experience that is fun and engaging and progressive, [people will] support you,” says Raskin, BA ’96, the Renegades’ president who previously served as an executive in the Rangers and Dallas Stars organizations. “And if you’re honest and if you give them good value.”

Thus the XFL’s second incarnation seemed to be working. After its one car crash of season in 2001—then, the XFL offered an extra-violent iteration of America’s favorite sport—the resurrected version featured fun and novel rules tweaks and anytime-in-game access to the players and coaches. The league changed kickoffs to shorten the run-up distance between blockers and defenders, used a centralized and transparent instant replay review system where fans could listen to ruling deliberations, and instituted a shorter 25-second play clock. The XFL appeared to be drawing the type of sizable interest that has evaded many spring football leagues. Then in March the COVID-19 pandemic hit the United States, and for a second time, the league folded.

“Honestly, it would’ve been easier if it would’ve failed because nobody cared about us,” Raskin says. “But the fact that we were so successful and it got killed by a pandemic, that’s what’s hard to stomach.”

The XFL made it halfway through its 10-game season before the coronavirus, which forced sports leagues across the United States (and society, in general) to shut down. By mid-August, Major League Baseball, the National Hockey League and the National Basketball Association, established leagues with merchandising, sponsorships and billion-dollar TV deals, all had resumed play. The upstart XFL, however, ceased operations almost immediately in March and a month later laid off nearly all its staff and declared Chapter 11 bankruptcy. Suddenly, all that Raskin and his team had built vanished for reasons beyond their control.

The XFL had a foothold. Major television networks—ESPN and FOX—airing the games gave it visibility, even though the XFL covered the production expenses. The broadcast quality was good and the games moved fast, with new wrinkles that weren’t gimmicky. The league also had name recognition, thanks to its infamous debut in 2001 and a subsequent ESPN 30 For 30 documentary.

Raskin, a Dallas native, was accustomed to being a part of successful enterprises. His first job after graduating from GW, where he played first and third base on the baseball team, was running a youth program for the Rangers in nearby Arlington; the Rangers won the American League West division three of his first four years with the organization. When he began working in ad sales for the Stars in 1999, with whom the Rangers shared an ownership group, the team was in the midst of consecutive Stanley Cup Finals appearances. 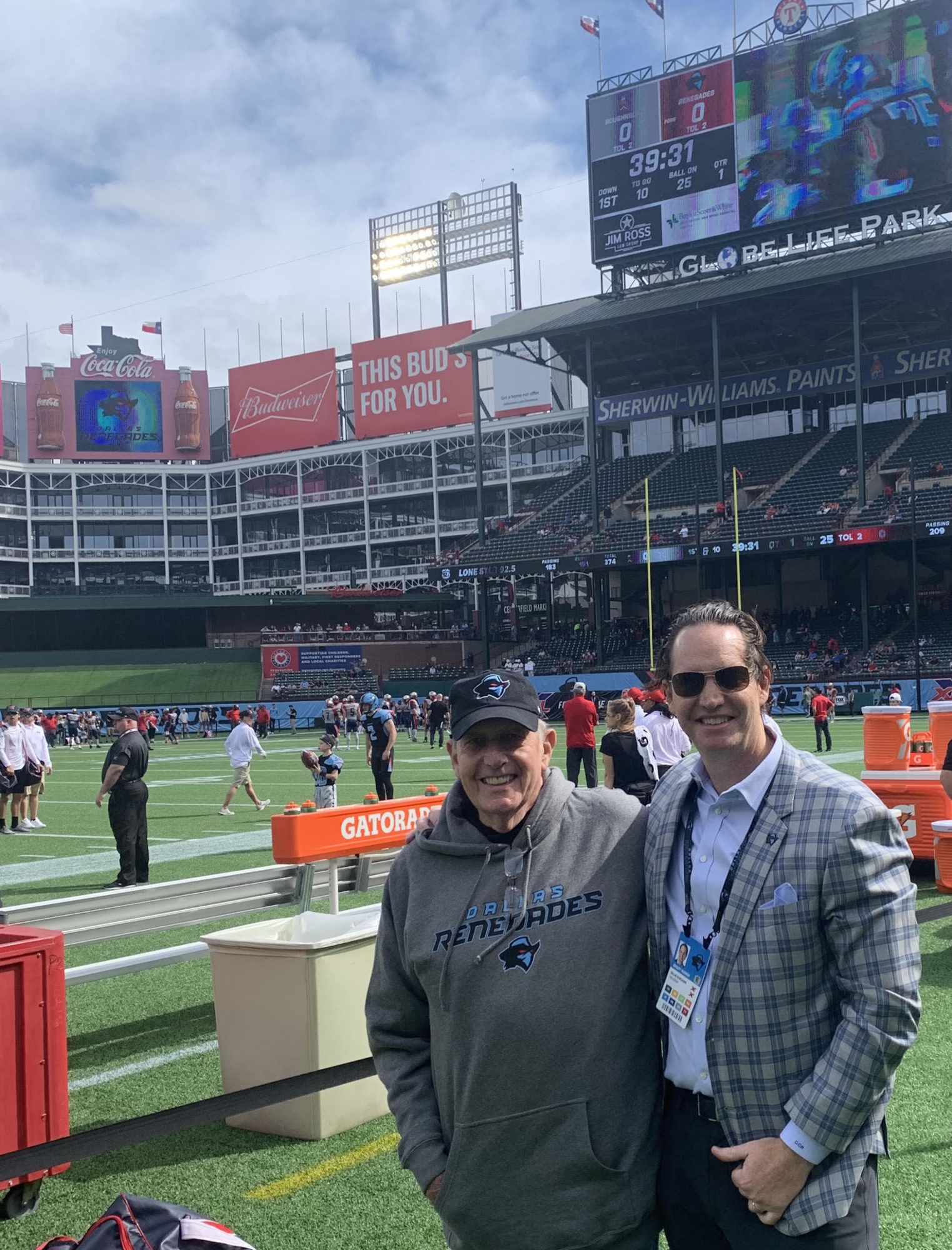 Grady Raskin (right) and his father Philip stand on the sidelines of a Dallas Renegades game.  (Courtesy Grady Raskin)

In 2019, Raskin latched onto a rare opportunity in pro sports: helping build a team from scratch. In 2018, McMahon announced he would be reviving the XFL. The new one was reimagined as safer, family-friendly and focused on innovations in play and presentation. The revamped league opened in February, a week after the NFL season ended.

Raskin became president—and the first office employee—of the league’s Dallas franchise, which at that point did not yet even have a name. The league was looking for experienced sports executives with ties to local markets, hence Raskin’s allure. After taking the job, Raskin had to sell fans and sponsors on an entity with no known identity, playing in a new league that shared a name (and owner) with an infamous and spectacular failure.

“I woke up one day and said to my wife, ‘How am I gonna do this?’” Raskin recalls.

He began by building a staff engaging in what he calls “hand-to-hand combat”—rendezvous with tourist bureaus, mayors, business groups, football booster clubs—across the North Texas market.

“Any group that would take my meeting,” Raskin says, “I would meet with them.”

By the time the XFL called in 2019, Raskin was the Stars’ vice president of corporate partnerships. He was happy, comfortable. While a huge football fan, “I didn’t even wanna talk to the recruiter,” Raskin says. But he was impressed by the study McMahon commissioned from global consulting behemoth McKinsey & Company outlining the league’s potential audience and the TV partnerships McMahon had secured. Survey- and data-based research conducted by McKinsey & Company showed that millions of Americans were open to watching more football as long as it didn’t conflict with the NFL or college games. That helped convince Raskin.

Raskin says he also was drawn to the increased responsibility of being a club president. After two months of deliberation, he came on board.

“Mainly it was me talking myself into taking the risk, taking the gamble,” Raskin says.

His decision was solidified when Raskin asked his typically cautious father—he’s held the same steady medical professor position at the University of Texas-Southwestern, where’s he worked for 51 years—whether he should make the leap from his staid place in an established organization into the XFL gig’s less-proven, more-ambitious waters.

Despite the star-crossed history of spring football leagues, Raskin is convinced that the XFL could work if tried again. “We have proof of concept, 100 percent,” he says, noting the league’s well-received innovations.

Over the summer, reports emerged that up to 20 potential buyers had expressed interest in purchasing the XFL out of bankruptcy. In August a group that included professional wrestler-turned-actor Dwayne “The Rock” Johnson bought the league for $15 million. The group says they plan to have a season in 2021.

While Raskin has tried to move on—he has been doing sports business consulting work since the spring—he says he’s open to an XFL return.

“I always say if you don’t listen when people talk, you’re crazy.”

For now he is grateful for the experience and how the opportunity transformed him.

“I really learned that falling down and picking yourself back up is such a great thing to learn how to do,” Raskin says. “Now I believe I can do anything. Before, I may have looked into a job and said, ‘How can I do that?’ I’ll figure it out. That’s my mentality now: I’ll figure it out. Because I know I can.”